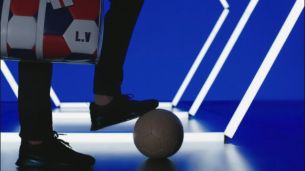 Having created the travel case for the World Cup trophy since 2010, Louis Vuitton launches their limited edition selection of goods in line with FIFA for this years World Cup.

Inspired by the official match ball of the 1970 FIFA World Cup, the capsule collection showcases two unique designs – the Keepall and Apollo bag as well as a selection of small leather items.

The Hexagonal design of the bags is mirrored in the light structure featured in the film. It opens on a flashing hexagon of lights, featuring the silhouette of a male figure poised with the ball at his feet. It then goes on to intercut a series of slick football skills with slower moments featuring the various bags. The different lighting setups all represent the colours of the bags themselves, and the juxtaposition of light and dark adds drama to the piece.

This fun and exciting new film was cut by Ruth Hegarty and directed by Jacob Sutton.