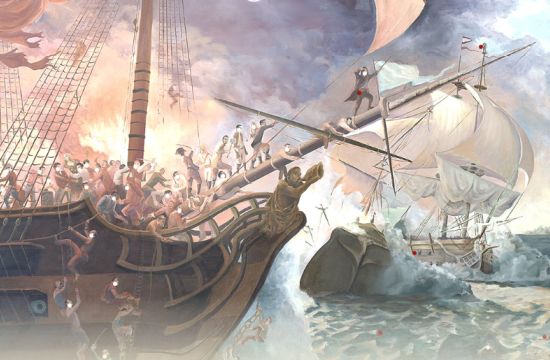 Like pirates? Like art? Then Sid Lee’s ambitious endeavour for the launch of Assassin’s Creed IV: Black Flag might just be the perfect combination of swashbuckling and brush strokes.

In July the agency began an ambitious interactive painting with Ecole Nationale Supérieure des Beaux Arts de Paris. The large 2,30m x 4,60 m painting allowed fans of the video game series to become part of a historical naval battle. Users were able to place their faces on characters from the painting, by using their webcam. Each character in the scene could be impersonated, be it a captain on a galleon bow, a dying soldier, or a sailor trying to escape the madness of the battle. By using a like button, the visitors vote for their favourite faces and the winners will be immortalised.

Embedded in the online interactive version of the paintin, produced by Unit 9, are snippets of video from the game, giving fans the chance to prepare themselves to delve into the Age of Piracy.

The final painting will be displayed at Le Musee de la Marine in Paris from November - in the mean time, check it out here: https://www.ac4bf-defyhistory.com/explore/