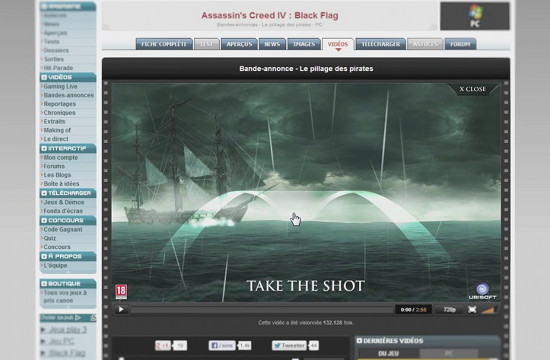 After the experience of the interactive multi-devices trailer last July, Ubisoft has once again trusted Biborg to create and produce the digital campaign for the launch of Assassin’s Creed® IV Black Flag.

Ubisoft set Biborg a simple but ambitious goal: allow Assassin’s Creed ® IV Black Flag to stand out in a hyper-competitive world and during the key period of the launch.

 The idea? Create an innovative format with ultimate impact to convince the gamers while also be appealing to the general public and position the game as a MUST this season.
 

Set in the Caribbean in 1715, the golden age of piracy, and with the charismatic Edward Kenway, Biborg split it into two different campaigns.

The campaign dedicated to ‘the gamers’ offers maximum interactivity for a maximum impact through different channels: Interactive Pre-Roll, Takeover Homepage with multiple formats and rich media. The Interactive pre-roll remains the ‘flagship’ format of the campaign as it offers an experience quite unique by a total immersion of the user at the heart of the action of the game while showcasing the diversity of the gameplay.

"The Homepage Takeover is now a ‘classic’ for Entertainment launches, so we really wanted to push up the new format of the interactive pre-roll to be where the competitors of Assassin's Creed won’t be. Mission accomplished: the interaction and immersion are intense! " Bruno Luriot - Biborg Business Director and co-founder - said.

A "mainstream" Campaign. The YouTube Europe campaign aims to reach a much larger target. With Biborg’s strong expertise - particularly related to its use in previous campaigns, more than 25 YouTube Masthead campaigns - seek to promote the TV campaign and maximize the media pressure right from the start of the launch of the game.

In parallel, Biborg designed a video interstitial for mobile and a digital outdoor campaign. From October 24, various creations "stand-alone" and two synchronized screens will be in trains, metro stations and shopping centres in Paris and other large French cities.

"It’s the fourth year that we provide the digital launch of Assassin's Creed. Just this year, we launched the ad campaign in February, a campaign in June for E3, a stimulus for Gamescom in August and now the launch of the actual game. There was also the "Interactive Trailer" in July. After AC: Brotherhood, AC Revelations, ACIII, and now AC IV, we aim to continue to innovate and improve our creations. We were also able to base our analysis of the performance on previous campaigns as well with the latest innovations in display." Explains François Girardot - Biborg Creative Director and co-founder.