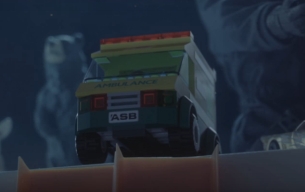 ASB has released a campaign in support of St John to help raise necessary funds for the purchase of a new, fully-equipped ambulance.

Created by Saatchi & Saatchi and Flux, the charming work imagines the night-time adventures of a little toy ambulance that wants to grow up to be a real ambulance for St John.

The toy block set ambulances will be available to purchase for $15 in all ASB branches, online and via ASB True Rewards, with 100% of proceeds going to St John.

ASB Head of Community and Sponsorship Mark Graham is thrilled to play a part in such a creative campaign for a good cause.

“ASB has a longstanding partnership with St John and we’re proud to work together on the St John Toy Ambulance campaign. Not only is the toy ambulance a creative and tangible way to demonstrate support for St John, but Kiwis can look forward to seeing a brand new ambulance on the road and know they played a part in making that happen,” says Mr Graham.