Arthur Sadoun To Take Over As CEO of Publicis Groupe 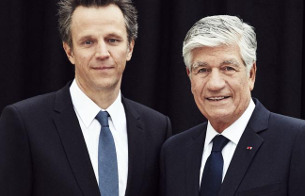 Arthur Sadoun will take over as CEO of Publicis Groupe from Maurice Levy on 1st June it has been announced. Levy has held the role for 30 years.

At 45 years old, Sadoun is the same age as Levy was in 1987 when he succeeded his mentor, the founder of Publicis Marcel Bleustein-Blanchet. Given that Sadoun currently oversees all of the group's creative agencies (including Saatchi & Saatchi and Leo Burnett), the move symbolises the agency’s core philosophy of continuity.

The appointment of Sadoun marks the final chapter of a succession process which began in the summer of 2015. This process was led by Elisabeth Badinter, the Chair of the Supervisory Board and the President of the Nominating Committee, and concluded that the agency had enough talent internally to avoid an outside hire.

Sadoun will begin work as Chairman & CEO on the 1st June 2017, and will be assisted by Steve King, who is currently CEO of Publicis Media. King will join current Board members Jean-Michelle Etienne and Anne-Gabrielle Heilbronner.

After overseeing the transition to a new CEO, Levy himself has been nominated to take a position as Chairman of the Supervisory Board. Levy told Le Figaro that “One of the secrets of Publicis’ great success has been the fantastic working relationship between myself, Marcel Bleustein Blanchet and Elisabeth Badinter”.

Speaking of Sadoun, Levy added, “He has a vision of the market and knew very early to integrate digital. He understands the trends of the trade and knows how to take strategic turns before anyone else. He is a charismatic leader who is capable of building teams. And finally, he is French. It’s important for Publicis as we identify ourselves as a global French company”.

During Levy’s three decades at the helm of Publicis, the agency has grown from around 3,000 employees to over 80,000, and is currently ranked as the number one agency in the world for digital.