Arsenal Gets Powered By Fans in Electrically Charged Puma Ad 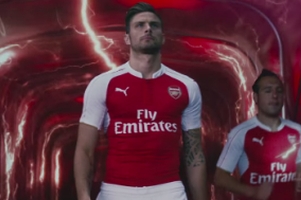 Global sports brands, Puma and Arsenal, celebrate a second season in partnership, with the launch of the 2015/16 campaign: Powered by Fans.

As part of the campaign, Puma has released a 60 second film which was shown at the Emirates Stadium on Monday 15 June as part of a live event, hosted by Thierry Henry, to launch the 2015/16 Arsenal Home kit. The spot was then released online for fans to view on 18 June.

In the film we see various Gunner’s fans watching a game of football – from a young boy viewing on his iPad to large crowds enjoying the game at the pub. The fans reactions help to power the Arsenal players and drive them forward. The idea behind the campaign is to show the importance of the fans and the integral role they play in inspiring the performance of the players.

The spot was produced by Paul McPadden at Outsider and directed by Chris Balmond. Jungle’s Graeme Elston mixed the spot to maximise impact. Each sound was carefully designed to reflect the mood and environment being portrayed and draw attention to every detail of the ad.