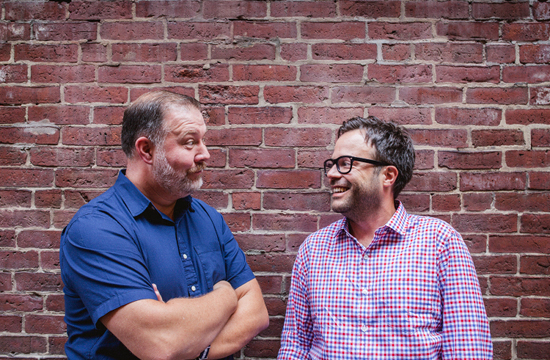 “Wade and Pete are both exemplary leaders in the prime of their careers. They’re adept at creating big conceptual ideas and inspiring the best work from others,” said LePlae. “This is an evolution we’ve desired, partnering our leading digital and design talents.”

The duo is recognized for idea-driven creative with deep expertise digital and design with a focus on craftsmanship.  This combination inspires risk-taking and influences new approaches to creative and design work.

Devers, having joined the agency in 1999, has been responsible some of the agency’s most iconic brands. His role as global creative director on the Jack Daniel’s family of brands has led to successes such as the launch of Jack Daniels’ Tennessee Honey which was the No.1 new spirit brand launched in the calendar year of 2011*. Johnson, since joining the agency in 2012 has driven a deeper collaborative partnership of creative and digital to drive large-scale conceptual campaigns rooted in technology.

“Wade has been an influential leader in Boston for a long time and Pete’s contributions since coming onboard last year have been outstanding,” said Hamlin. “Their complementary backgrounds make them a powerful creative force and I can wait to see their influence emerge in our work for clients.”

Earlier in the year, Devers was elevated to executive creative director and his remit expanded to include executive creative leadership of a number of key clients accounts and revamping the agency’s design practice as an industry best-in-class capability.

The dual appointment succeeds the role of Pete Favat who served as chief creative officer for the Boston office.

Devers joined Arnold Worldwide in 1999 to work on Converse and has since led the creative efforts for multiple Fortune 500 brands in his tenure. Currently, he is the global account director on the Jack Daniel’s family of brands and leads creative for accounts including CVS and Fidelity. His work has been recognized by the industry’s most prestigious creative shows, including Cannes, D&AD, One Show and ANDY. Devers began his career at Leonard Monahan Lubars & Partners in Providence, RI.

Johnson joined Arnold Worldwide as senior vice president, group creative director focusing on digital and integrated campaigns. He joined from LBi New York where he helped transform the creative merger of independent agencies such as Icon Nicholson, Syrup, Lost Boys and Special Ops into one digitally focused, integrated creative shop. Prior to his time at LBi, Johnson served as creative director at Tribal DDB and before that, senior copywriter at Ogilvy & Mather and McCann Erickson.