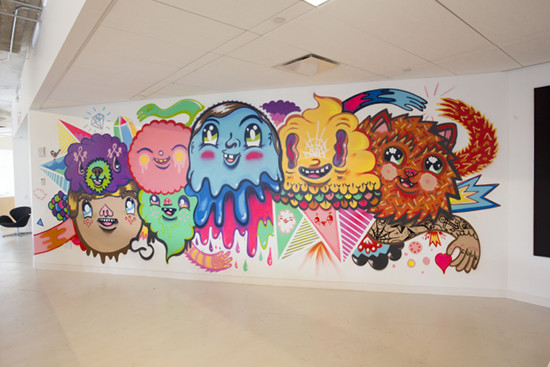 As an integral part of a campaign to inspire staff, Arnold NYC creative director and artist, Nate Guillard created an indoor street art/graffiti-inspired mural. It was commissioned as part of an agency-wide creative innovation campaign being led by CCO Aaron Griffiths.

View the making of below:

The inspiration for artist and Arnoldnyc creative director Nate Guillard's mural is simple:  working together is fun. The plan was initially hatched when Arnold's New York office moved into its new open space in an historic printing house at 205 Hudson. The space is vast and bright, and the walls were intentionally left blank to allow staff to live in the space before being asked to use the bare canvas to express who they are.

Nate was asked to create a mural in the creative department space that would bring joy, color and inspiration to the creative department and the entire Arnoldnyc office. Because it is not uncommon to spend long hours at the office, it needed to be a "cool and happy place" to be. Nate is at his most happy when he is making art, and color makes him smile, so those were the more obvious things that inspired his mural. In addition, Nate's love 15-year love affaire with graffiti and street art in general gave him the inspiration to create the fun, colorful and graffiti-esque characters seen in the completed installation. An Art Director by trade, Nate's personal work allows him to expand his talent beyond what might normally fly in the world of advertising. It can explore creative communication outside of a print ad, even without words. Colleagues often tell Nate how they identify with the cloud of characters in his mural. And it's just the beginning of the transformation of Arnoldnyc's new space from a blank canvas to an inspirational creative epicenter.

While you may (or may not) have seen Arnoldnyc's earlier creative innovation expression, known as Pogogram, the socially connected, mid-air pic-taking extreme pogostick, the mural video also shows staff channeling creative inspiration through ping pong (Team ArnPong) and pooches.