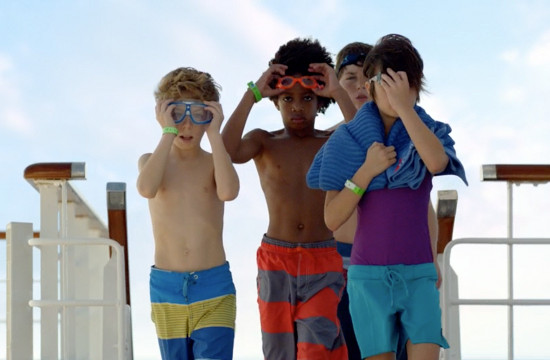 Carnival Cruise Lines today announced it is the national cruise line advertiser of NBC's telecast of the Sochi 2014 Olympic Winter Games, debuting a new marketing campaign featuring a tailored TV spot along with cinema and digital elements.  The company will also provide other fun ways for fans to celebrate the season through social channels, including a Carnival Cruise Lines #ChampionSHIPS contest that challenges people to participate in a photo competition involving fun, cruise-themed categories on Instagram.

The new campaign is designed to build additional consumer interest during what is known as "wave season" – a key window for generating cruise reservations.  Carnival recently announced a record reservations month in January citing unprecedented Web traffic and strong support from travel professionals.

Carnival's new "Bobslide" TV spot follows four young, thrill-seeking cruisers who race together down one of Carnival's popular waterslides. As the children stride across the deck in slow motion, a sportscaster voice over calls the action saying, "Here's the crew to beat today: Carnival-1. Hard to believe they just met yesterday."  Donning goggles and bathing suits, the four-kid team twists and turns through the giant slide, reaching the finish line with big smiles, arms raised and a gigantic splash, creating a memorable moment for all. The sportscaster exclaims, "That was a run for the ages!"

"With our brand motto of 'Fun for All, All for Fun,' we couldn't think of a better time to showcase our spirit than during NBC's broadcast of the Sochi 2014 Olympic Winter Games," said Jim Berra, chief marketing officer for Carnival Cruise Lines. "As part of our ongoing marketing campaign, our new 'Bobslide' spot is not only emblematic of the amazing moments millions will celebrate this February, it also illustrates the fun and memorable experiences our guests of all ages enjoy every day on Carnival cruises."

"We were inspired by the spirit of sport, its camaraderie and its ability to bring friends and family together. The activities on a Carnival cruise represent that pure sense of thrill and joy and we wanted to capture that emotion," said Pete Johnson, executive creative director, creative lead, Arnold Worldwide Boston, the agency that created the ad. "The spot taps into the imagination and excitement of the newly found friends onboard the cruise and the exciting adventures that can play out."

Carnival will also create more ways for fans to get in on the action through a series of contests, videos and posts on the line's highly trafficked social channels. Each week via Instagram, Carnival will encourage fans to compete in a fun photo contest in various categories such as best game face, best sand versus snow image, and best water slider.  Fans submitting winning photos will receive Carnival Cruise Lines gift cards valued at $500 for first place, $250 for second place and $100 for third place.

Among a variety of other social media initiatives, Carnival will post a collection of videos that provide instructions on how to create winter-weather inspired warm cocktail recipes developed by the cruise line's master mixologist. The videos will be viewable via YouTube and promoted on Carnival's various social channels

Additionally, in honor of the great international event, Carnival crew members – who hail from more than 100 countries – will cheer on winter sport athletes from their home teams on video messages that will also be featured on Carnival's social channels.