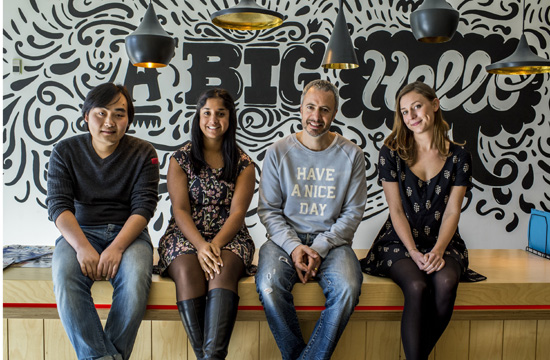 After first meeing at University in 2005 the girls both graduated from AWARD School before teaming up permanently for three internships during 2009-2010. They landed their first ‘grown up’ job as a creative team with Us Sydney in 2010 producing notable work for Nike, SBS and Ron de Jeremy – the rum owned by legendary porn star Ron Jeremy. Although still relatively young they have six awards under their belt including Young Lions Finalists in 2012 and Young Lions Runners Up in 2012.  In 2011 they were also awarded Best Ads for their Outdoor campaigns for Lady Gaga meat tag and Luxbet toilet doors.  They also had an installation in Sculptures by the Sea earlier this year.

Joining them at AF Towers is Art Director Ben Xu, the first graduate of Arnold Furnace's new intern program, ‘BigFoot’ (short for big foot in the door, see what they did th’…oh never mind). Ben hails from Shanghai and 12 years ago came to Sydney to study design. After graduating Ben returned to China and honed his skills in several agencies, including Dentsu Shanghai.

But the lure of golden sands and Chiko rolls proved too much and after sitting in a traffic jam for 3 hours one day, Ben decided the time was right to come back to Australia. It wasn't all plain sailing though as he had to endure an unscheduled year of working in a chicken factory before Tom Spicer saw his book and invited him onto the Bigfoot program.

Tom said, “I've been looking for young talent for some time and I'm delighted to have snapped up Chloe, Archie and Ben. As well as being fantastically original thinkers the girls have an incredible maturity to their work which is very rare in a young team.  Ben also has an amazing knack for coming up with big ideas - his book is almost entirely in Chinese but is full of great insights that are universally true. He already has a big campaign for Jack Daniels in pre-production and is a fitting first graduate of Bigfoot - which by the way now needs new recruits, please contact heather.wright@arnoldfurnace.com.au to apply.”