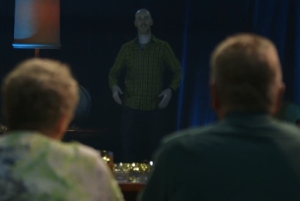 Jack Daniel’s has been bringing people together over a Christmas whiskey for 148 years and this year the brand wanted to add a contemporary twist to that tradition.

Setting out to give a few handpicked fans an extra special Christmas experience, the brand used cutting edge holographic technology to beam distant friends and family into a Sydney bar to share a chat and a drink (of course).

After a global search in October the whiskey maker found 3 sets of drinkers to reconnect – a sister and brother living in Sydney and Vancouver respectively, parents from Melbourne whose son has been living in Oslo for 12 years and a couple of besties in Broome and Berlin who hadn’t seen each other for 4 years.

Partnering with Sydney’s own Musion who are global leaders in the field of holographic experiences, the event surpassed expectations with tears on both sides of the globe.

Tom Spicer, Arnold Furnace ECD said “Normally tears are something to be avoided on the day of shooting, but in this case it was definitely a good thing. It’s a real privilege to be involved in such a rewarding project. Massive thanks to the Jack Daniel’s team for having such faith in us from the beginning and to Finch for pulling it off with such a deft touch.”

Tim Ryder, Brand Manager, Jack Daniel’s Family of Brands said: “Our entire 2014 Christmas campaign, has enabled us to bring something special to Christmas this year. Whether it be our in-store presence at over 1,500 locations Australia wide, our Christmas website or this amazing video, the opportunity to bring friends and family together is important to us. For Jack Daniel’s, it’s not what’s under the tree, but who’s around it that matters.”