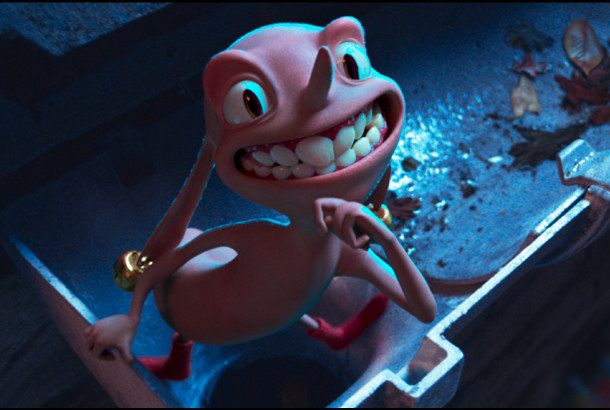 A mischievous ‘fool’ determined to ruin Christmas stars in the eagerly awaited Argos Christmas advert, which airs tonight during Coronation Street on ITV and Gogglebox on Channel 4 from 9pm.
The ‘fool’ – a mischievous, impish creature with bells on its long ears – causes chaos about the house as anxious families desperately try to put the finishing touches to their Christmas preparations.
From breaking fairy lights and stealing sellotape, to unwrapping presents and knocking the angel from the top of the Christmas tree, the fool is determined to make as much mischief as possible.
Just as it seems the fool’s ruinous deeds will never end, an Argos Fast Track delivery driver comes to the rescue by giving the pesky creature a swift boot into his van where it lands amongst an army of its kind who have also been thwarted in their quest to ruin Christmas
The message behind the 90-second ad is simple: with Click & Collect available at more than 1,000 locations, including 250 Argos stores and collection points inside Sainsbury’s stores, and same-day Fast Track home delivery, Argos is there for everyone’s shopping needs, helping to fool-proof Christmas.
Gary Kibble, Marketing Director at Argos, said: “Families across the UK work really hard to make their Christmas special, so when something doesn’t go to plan it feels as though there’s a mischievous force working against them. We created the fool as the cheeky embodiment of this frustration and the ad brings to life the tiny annoyances that can cause unnecessary festive chaos.
“Luckily for Brits faced with the fool, we have more than 1,000 stores and pick-up points and almost 1,000 delivery vans on the road so customers can get Christmas orders, such as fairy lights or the latest toy or tech gift, the same day whether they Click & Collect or get Fast Track delivery. We expect to deal with around 19 million orders in stores over Christmas, so we’re making Christmas truly fool-proof for British shoppers.”
Yan Elliott, Joint Executive Creative Director at The&Partnership London which created the ad, said: “Every Christmas, something goes wrong in the run-up to the big day – it’s inevitable. Our cheeky Christmas fool personifies that. We hope this mischief-filled advert helps ease the stress for families this year – reminding them that, whatever curveballs Christmas throws at them, Argos is on hand to save the day.”
view more - Creative