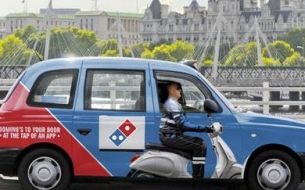 In a campaign full of media firsts, planned and bought by Arena Media, Domino’s Pizza will be advertising via London taxis for the first time, as well as via podcast platform, Acast.

Starting last week, Domino’s branding appeared on London cabs, with the humorous creative by Iris, making, it look as if cabbies are Domino’s delivery drivers. The London-focused initiative will run throughout the summer to boost visibility of the Domino’s brand in the capital.

Planned and bought by Arena Media, the campaign also extends inside the taxis, with each of the cabs being specially wifi enabled. Once connected with the in-cab wifi passengers will be able to download the Domino’s app and receive a bespoke offer code for placing an order. A social media competition, encouraging people to spot and snap the branded cabs to win prizes, will extend the reach of the campaign further. 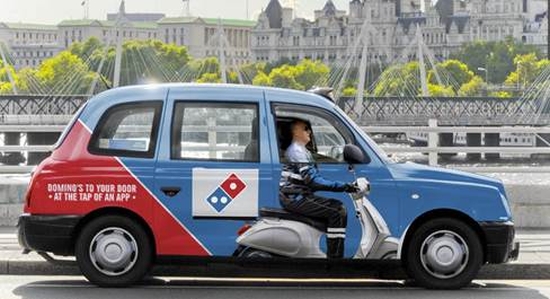 The campaign is also running on podcast player service, Acast, across various platforms including iTunes. The Acast activity is location-based, with geo-targeting to reach Londoners within the M25.

Kay Tasker, Group Business Director at Arena Media, said: “We know Londoners consume media differently from the rest of the country: they tend to be the first to adopt new technology and are always tuned into mobile devices, and this campaign is very much informed by these behaviours. Podcast listening has likewise increased significantly in recent years – being up 36% year on year –  making placement on Acast a great opportunity for Domino’s to engage with a young, London audience.”

Debbie Myszkowska, London and Local Store Marketing Manager at Domino’s, added: “London is a key audience for us, and with this campaign we’re looking forward to ensuring the Domino’s brand is front of mind, and to driving further engagement with the app.”