Are You Hot or Not? Find Out with New Carphone Warehouse App 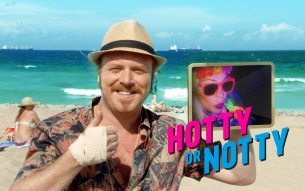 As part of its advertising campaign featuring comedian Keith Lemon, Carphone Warehouse is launching a new mobile-optimised web app, devised by independent creative agency Brothers and Sisters, to add another layer of consumer engagement with the brand.

Keith Lemon fronts the addictive web app in his anarchic style to conduct his “highly scientific test fing” to discover if a person is a “Hotty” or a “Notty”.  In a test that totally disregards personality, users upload their photo -or that of a friend- directly to Keith Lemon’s mobile tablet via http://www.hottyornotty.co.uk/, which he then shows to hand-picked, focus groups on Miami Beach.  After intensive discussion, Keith delivers the “Hotty” or “Notty” verdict.

The mobile/web experience provides the core target audience of Millennials a playful way to share content with friends and interact with the brand online.  The films can be viewed while on the site, and can be saved if shared across social platforms via email, Facebook or Twitter.

Andy Fowler, Executive Creative Director of Brothers and Sisters says, “‘Half of Britain is hot. Half is not. According to the people of Miami, which half are you?”

Keith continues his Super Mega Personalised Quest Fing around the globe, visiting countries which don’t have Carphone Warehouse, to highlight the issues people face when they’re not on the right mobile phone deal.  As with the advertising campaign – launched with Keith in Tokyo, and the latest series of ads with Keith in Miami – the web app films are directed by Chaplin and Forbes through Hungry Man.