Are You Fast Enough for Reebok's ZPump 2.0? 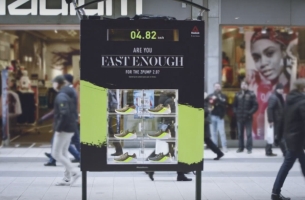 For Reebok, running is about more than treadmills and racetracks. It’s a vital part of everyday life. So what better place to launch the ZPump 2.0, than right in the middle of the busiest street in Stockholm?

Last weekend, Reebok set up an outdoor billboard in central Stockholm, challenging people to a human speed test. With a built-in speed cam and advanced tracking technology, the billboard measured pedestrians’ speed. Anyone who ran past it faster than 17 km/h, unlocked a brand new pair of ZPump 2.0 shoes.

“We really like the idea of taking a classic billboard and turning it into something disruptive and unique. This gives customers an instant experience and as a brand, we’re able to provide something of real value,” says Markus Schramm, creative at advertising agency, Animal.

As soon as the billboard went live, Stockholmers immediately began lining up to take on the challenge. People of all ages ran up and down the street at top speed in the hope of being fast enough for the ZPump 2.0.

“For us at Reebok, it’s important to do things for real and to actually activate the target group. We want to inspire people to run and push their limits, even when they’re not at the gym. That’s what our tagline ‘Be More Human’ is all about,” says Filip Lagerbäck, PR & Social Manager at Reebok Nordic.

The campaign also built on the fact that we’re all different, including our feet. But using Reebok’s revolutionary and iconic Pump technology, the ZPump 2.0 can be custom fit to any runner.

The billboard was created and implemented by Animal, a creative agency based in Stockholm. Animal is best known for campaigns like TrumpDonald.org, the tattoo campaign 'Reebok Forever' and the escalator stunt “Reebok Lift”.