Are You Experienced? San Miguel Wants to Help Enrich Your Life 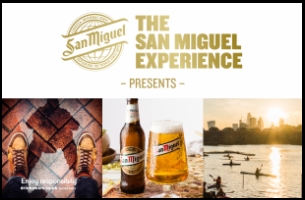 This week San Miguel is offering inspiration for people to live richer lives, welcoming guests to The San Miguel Experience at London’s One Marylebone. Running from July 19th to 21st, the event offers a ‘world of rich experiences’ in the historic venue, accompanied, naturally, by a selection of San Miguel beers.

The ticketed event is open to the public and serves as a real-life embodiment of the beer brand’s Rich List campaign. Now in its second year, the Rich List is a group of individuals assembled by San Miguel who live their lives to the fullest - people who posses a different kind of wealth, valuing experiences over possessions.

This year the Rich List will be completed by individuals from the public, nominated either by themselves or their friends and family for their thirst for discovery, creativity or new experiences. The list will be decided by a jury including brand ambassador and explorer Levison Wood and Senior Brand Manager at San Miguel UK, Dharmesh Rana. The 20 individuals who make up the final group will form a central part of the brand’s marketing campaign for the next year.

This week’s Experience event gives a good impression of the ethos behind the campaign. An assortment of informative and entertaining experiences are on offer for visitors. Guests can expect an audience with Levison as he recounts his adventurer's tales, masterclasses with Belgian chocolatier and pastry chef Willem Verlooy, tutorials on how to create stunning patisseries, Instagram workshops with professional photographer Mike Kus, the opportunity to make and drink your very own San Miguel-infused cocktail and adventure planning workshops from adventurer and entrepreneur Belinda Kirk. The event also includes the UK premiere of virtual reality bird flight simulator, Birdly - the chance to soar over the streets of New York City like an eagle. The delicious small plates on offer are inspired by San Miguel’s journey from the Philippines to Spain via New York. Of course, there’s also beer. At the far end of the ex-church, presumably where the altar once stood, is a bar with more than a hint of a shrine about it, offering exclusive tastings of San Miguel’s finest beers, some never available in the UK before.

Having a physical presence in London is all about bringing San Miguel’s brand values to life, says Dharmesh. “It’s one thing a brand talking about these amazing people [on the Rich List] who do all these amazing things and live amazing lives,” he says. “That’s great and it makes me feel a little bit inadequate as an individual sometimes, when you read some of their stories. But at the same time, as a brand, we want to inspire you and give back more.”

Guests can learn a host of talents from San Miguel’s ‘life-rich’ friends to help them go out and carpe that diem in their ordinary lives. On the other hand attractions like Birdly use technology to experience otherwise impossible things. “How many people would love to fly like a bird through the New York skyline,” asks Dharmesh. “That’s an amazing thing to do. That’s where technology really works as well.” 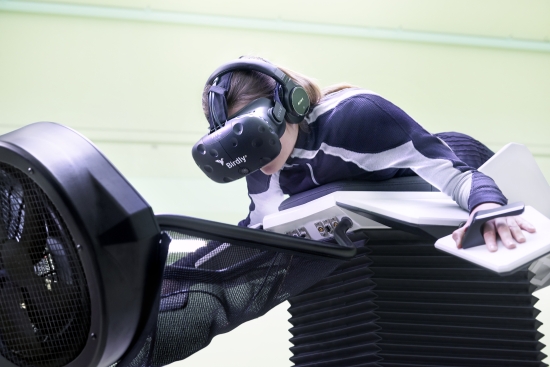 Brands’ VR experiences have a tendency to be heavy-handed with the branding or outright gimmicky, but San Miguel has kept its footprint on the Birdly experience light, only adding a few billboards in the simulation’s existing New York cityscape. “We have to remind people, subtly, why they’re here,” says Dharmesh with a wry smile. “It’s an opportunity. For me to buy that advertising space in New York would cost an absolute fortune. But why wouldn’t I do it [virtually] for a few days?”

So where does beer fit in? Simple. People who have experience-rich lives want to talk about it over a cold one. And if the marketing message gets through like Dharmesh plans, “whether they’re in the pub [or] at home telling their friends and family about what they did, they’re doing that over a San Miguel,” he hopes. “Because inevitably beer is a sociable thing and it’s best enjoyed shared, in my opinion.”

It’s a neat fit in other ways, he observes: “People are travelling more. It’s super easy, whatever your budget. That’s why you go into a supermarket now and see bays of food, sourced from different areas of the world. There’s a trend for from-scratch cooking with authentic ingredients. Beer is a natural fit because it’s what accompanies the food. If I’m trying to replicate that amazing moment I had when I was on holiday, wherever I was, I want it to feel the same.”

San Miguel has already received some fascinating characters through the nomination process and with entries open until July 30th, Dharmesh is excited about the stories they’ll encounter. “There are so many stories of people who’ve worked in the city and are jacking it in, he says. “Because it’s not about the money anymore. This is about whether [people] feel self-fulfilled at the end of the day.” For example, he mentions 2016 Rich List-er Tinja Myllykangas, who traded her high-pressure job in New York City’s concrete jungle for a life as a husky trainer in the vast expanse of the arctic tundra. “To have the confidence to do that…” marvels Dharmesh. “She’s done it because of the way it makes her feel. That’s why she made the list.”

This year’s list is moving on from 2016’s in several ways. The addition of extra real-life events, invitations to the public and inclusion of the judging panel will be backed up by more hard-nosed decisions, such as buying extra above-the-line media. Dharmesh mentions strategic insights that have helped shape the campaign this year: “One of the big ones for me was around keeping the brand story alive for longer. You’ll note from the launch that we were on cinema from April all the way through December. Whereas previous years we kind of traditionally only spend quite heavy in the summer. So from a traditional comms perspective consumers aren’t seeing enough messaging from us.”

Through the Rich List, Dharmesh and his team are hoping to build a growing network of people to embody the San Miguel brand. Once the new list is finalised we will see the results in action. “Their stories will start to be communicated and hopefully inspire people,” he says. “We want to get people out there, exploring the world. We live in a world where that should be so easy. It’s about how we make it easier for people.”