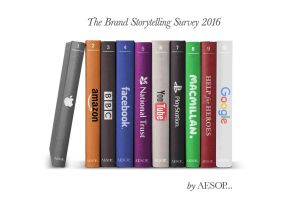 Apple has been identified as the UK’s top storytelling brand for the fourth year in a row according to new research conducted by Aesop Agency. The annual Brand Storytelling poll reveals a top ten dominated by charity and media brands with Amazon, the online retail giant, moving up 11 places to take the second spot with the BBC a close third polling 36% of the votes. Charity brands National Trust, Macmillan and Help for Heroes rank 5th, 8th and 9th respectively with the top ten completed by Facebook (4th), YouTube (6th), Playstation (7th) and Google tenth.

Conducted in association with 3Gem Research the study polled 2000 consumers in August asking them to cite brands against best-practice storytelling attributes. In a development to the study consumers were also asked to match brands to archetypal popular characters.

Apple refuses to be bumped off the top brand storytelling spot but is being pushed by Amazon who took a dramatic leap up the rankings to take second place. Apple is an innovator producing desirable products and consequently the consumer is ‘intrigued to see what they’ll do next’ – ranking 1st in that category polling almost half of the votes (45%). Apple is also a brand with character and personality – polling the most votes (46%) against this attribute. Apple performs consistently well across all the storytelling criteria - only slipping outside the top ten against the ‘brands that are considered authentic’ category, ranking 12th

Amazon is a brand with vision and a mission (38%), a brand we want to talk to our friend’s about (43%) and a brand we’re intrigued to see what they’ll do next (41%). It’s also a brand that stirs the emotions with 90% of those respondents with an emotional response to Amazon feeling the love! Interestingly the study has revealed a greater resonance with the older consumer with 45-54 year olds voting the retailer above Apple and one place behind the National Trust. Amazon failed to make the top ten amongst 18-24 year olds.

Commenting on Amazon Ed Woodcock says: “Amazon’s vision is ‘to be earth's most customer-centric company; a place where people can come to find and discover anything they might want to buy online.’ With each year, Amazon seems to introduce new products and features that help deliver on this. As mission is an important element of story, Amazon’s storyline gets reinforced with each successful initiative. And the more Amazon delivers, the more people seem to fall in love with it.”

Retailers rise up the rankings but M&S takes a tumble

It’s been a good year for the major retailers with Tesco, Sainsbury’s, Morrison’s, Boots and B&Q all rising up the rankings resulting in a category ranking high of sixth.

Following a top 20 ranking in the 2013 inaugural study, Tesco has consistently dropped down the rankings - falling out of the top 50 last year. It was felt that the UK’s no.1 grocer had lost its sense of purpose and that a heartfelt reappraisal of the ‘Every Little Helps’ positioning was needed.

Following eclectic activity from the retailer including the integrated ‘Smile you’re on Tesco mobile’ campaign by Sapient Nitro and the ‘Vinyl Back in Store’ print campaign by BBH the supermarket giant has rallied with 40% of consumers citing Tesco as having ‘done something memorable in the last year’. The retailer also ranked highly against the ‘Brand you want to talk to other people about’  (12th) and the ‘Brands that have an opinion’ (18th) categories.

Conversely, M&S has recorded its biggest fall to date dropping twelve places to 34th - the first year the retailer hasn’t topped the rankings amongst grocers with Lidl bagging the top spot this year (24th).

The study has revealed mixed fortunes for M&S with the retailer struggling against a number of storytelling criteria. Just 18% of consumers identified M&S as a brand that ‘creates their own world’ with only 11% citing the retailer as a brand they have an emotional response to. However, of those consumers that do have an emotional connection to M&S – 90% identified that emotion as ‘love’.

“The discounters continue to develop and deliver on their easy-to-understand narratives about surprising quality and value.” Explains Ed Woodcock. “Conversely, the results suggest that the mental space occupied by M&S seems to be less distinct - respondents seem to be unsure about what M&S stands for these days. Nevertheless, the brand is still loved by a hard-core with long memories of a distinctive M&S brand world.”

Brands are struggling to establish an emotional connection with the consumer with only ten brands polling 20% or more of the votes.

Not surprisingly charities perform well in this category with Help for Heroes topping the list with 41% followed by Macmillan, Cancer Research and the British Heart Foundation.

14 of those brands surveyed, including E.ON, Nurofen and DFS, polled 3% or less of the votes with most brands struggling to make an impact against this particular storytelling criteria.

“So many of our purchase decisions are emotional, and yet too few brands seem to elicit strong emotional responses. One of the most powerful aspects of narrative is its ability to speak directly to our emotional brain, where lasting beliefs are formed. There is good reason why make-believe is called make-believe. Good storytelling brands that follow through on their promises appeal to positive emotions,” said Ed Woodcock.

Ryanair – becoming a first class storyteller (turbulent times for the others…)

Ryanair is the UK’s best storytelling airline - knocking Virgin Atlantic off the top spot that drop 32 places to 49th. BA take the third spot in 53rd (dropping nine places) with Easyjet picking up the wooden spoon at 69th.

Last year, following the reporting of a 66% jump in full-year profits plus nine million additional passengers, Michael O’Leary, Ryanair’s ‘love to hate’ CEO famously said “If I’d only known that being nice to customers was going to be so good for my business I would have done it years ago”.

Unsurprisingly, Ryanair scores most highly against the ‘opinionated’ category with 30% of consumers citing the budget airline as ‘having an opinion/is opinionated’ ranking an impressive 8th for that category. The consumer is also keen to see what Ryanair will do next (25%) - although the airline struggled against the ‘authentic’ category polling just 17% of the votes and in the bottom 20 with a ranking of 168th

“Here is a good example of a brand changing their story and acting on it. Ryanair is the airline we loved for their fares but hated for their blunt communications and unaccommodating service. Changing their tune seems to have borne results. The reputation for value remains clear, but the tone has softened for the better.” Ed Woodcock, Director of Narrative, Aesop Agency.