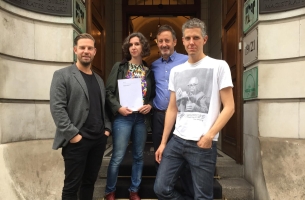 The APA & IPA have launched the new APA/IPA Interactive production contract today at the Courthouse Hotel, London. It is an important step for APA and IPA members creating interactive content, aiming to do for interactive content what the Part 1 (PIBS) and Part 2 does for TV production- create a foundation on which production companies and agencies can get on with making the best commercial possible, rather than being mired in negotiating contract terms.

Any film production- whether for TV, the internet or whatever, can and should be contracted on Part 1 (PIBS) and Part 2- the interactive contract is for other types of work: web builds and experiential projects being the main ones.

The purpose of the Interactive Framework, which the APA published, with the IPA last year is to help the parties agree and define the scope of work, how changes will be managed etc, to meet the way interactive productions need to be managed that are different to TV/film production- the difficulties of exploring feasibility against budget, identifying what work is being undertaken and allowing and enabling the client, through the agency, to add to what they require as the project progress but within a framework ensures the scope of work and thus budget are still controllable.

Lins Karnes, Managing Director & Executive Producer, Digital,  B-Reel, says: “I am delighted that, with the IPA and the key agencies involved there, we have been able to create a document which is a solid foundation for interactive productions and will help to keep UK interactive production companies and agencies at the forefront of interactive work”.

Steve Davies said: “A contract doesn’t sound exciting but it is. Standard contracts and good business practice underpin great work by creating the conditions in which creative businesses can develop and everyone can concentrate on creating great work, rather than on contractual terms. It is one of the great strengths of UK commercials production, which now extends to interactive production."

Valentina Culatti said: "It has been hard work for all the professionals involved and we are glad we got to this result as a team. This meeting is important in giving the whole industry an understanding of how we created these documents and how and when to  use them.”