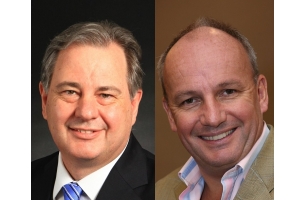 Asia Pacific Effie Awards, the region’s symbol of marketing effectiveness excellence, has named two heavy weights as the first 2 of 4 Heads of Jury for the 2015 Awards.

Ross Jackson is the Head of Cross-Border Business and Client Marketing for Asia Pacific, Central Europe, Middle East and Africa. He joined Visa in 2008, in the concurrent roles of Marketing Director for South East Asia and Product Innovation Marketing Director for Asia Pacific. He was appointed to lead Cross Border Business and Marketing Analytics AP before his current role. Prior to moving to Singapore, Mr. Jackson was Head of Cards (Issuing and Acquiring) for Westpac Bank, New Zealand.

“Having judged the Effies for a couple of times, I really appreciate the impressive standard of works produced in this region. I am honoured to be invited as a Head of Jury for APAC Effie this time round and do my part in championing effectiveness. From a client’s perspective, effectiveness is what matters to us,” Ross shared.

Chris Thomas is the Chairman & CEO of BBDO Asia, Middle East & Africa and Chairman of Proximity Worldwide. Chris entered the advertising business at Dorlands in 1984 and has since been leading the teams in the various agencies he was with, including Abbott Mead Vickers BBDO, Ammirati Puris Linas (APL) and Lowe Lintas, where he was the Managing Director.

Chris was subsequently appointed Chief Executive of Proximity London in 2003 and in 2006, as the Chairman & CEO of BBDO and Proximity in Asia. As an advocate and strong believer of marketing effectiveness, Chris’ leadership has also led him in bringing BBDO to be one of the usual names in Effies and notably achieved the APAC Effie 2014 Agency Network of the Year Award.

Chris said of this appointment, “I am delighted to be a jury head for APAC Effies 2015. As an industry it is critical we continuously demonstrate the effectiveness and value of what we do. The Effies play an important part in doing just that.”

Commenting on the appointments, Awards Chairman Jarek Ziebinski said, “The Heads of Jury play an important role as guardians of marketing effectiveness in our region via their work for Asia Pacific Effies. I’m excited to have such highly-respected colleagues join me on the Judging Committee and look forward to stimulating exchanges with them on the best campaigns from this part of the world during the judging process.”