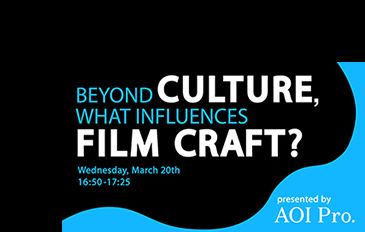 AOI Pro. announced that on Wednesday, March 20th, it will host a panel discussion 'Beyond Culture, What Influences Film Craft?' at the ADFEST 2019 to talk about the various challenges of crafting films around the world.

Last year, at the first-ever ADFEST session hosted by AOI Pro., Julie Thomas-Toda spoke with Joseph Kahn to reveal his passion for film craft that made him one of the world’s most influential filmmakers of pop culture today, and this became one of the most popular sessions at the festival.

“All three of the directors that I will be speaking with originally began their film careers very differently. Karina started her career as a fashion photographer. Sling was an art director at an ad agency, and Aki was a creative editor,” Julie Thomas-Toda comments. “Now, they are successfully working as directors in Asia and internationally for a variety of distinctly different markets and clients. This session asks them in what ways their film craft and aesthetic decisions as a director were influenced knowing that a particular ad was for a specific market.”

BEYOND CULTURE, WHAT INFLUENCES FILM CRAFT?

Beyond culture, cast, location and language differences, is there really such a thing as a Stereotypical Looking Ad from a certain country? What distinguishes an advert to be from Japan, or Malaysia or France or the UK or some other place in the world?

Are the visual aesthetics, production techniques, and rules of filmmaking driven by cultural and national differences? Is film craft unique in Asian countries compared to for example Europe or America? What common characteristics or differences are there? Is it the cinematography, production design, casting, music, edit, colour, etc. What is it? How do filmmakers craft their stories for an intended audience? A moderated panel discussion amongst Asian filmmakers about the various challenges of crafting films around the world.