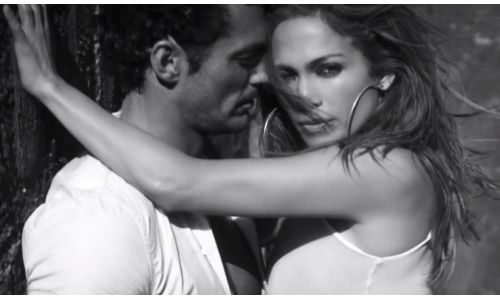 Director Anthony Mandler unveils his latest showstopper with the gorgeous video for J.Lo’s “First Love,” the second release off of her new album A.K.A.  The world has been waiting since a steamy image was released last week revealing Jennifer Lopez in a passionate embrace with the world’s only male supermodel, David Gandy.  The suspense was amped with Entertainment Tonight’s behind-the-scenes look at the shoot leading up to the video’s premiere on Vevo Thursday morning.

The clip features only two people, with the British model and Dolce & Gabbana muse David Gandy playing the part of J.Lo’s love interest. The project marks Gandy’s first music video, a fitting debut considering the treatment’s visual references to the iconic Supermodel era.  And while the word ‘glamour’ has always described Jennifer Lopez, the organic, stripped-down tone of “First Love” feels like a new discovery.

Anthony Mandler brilliantly captures the essence of “First Love,” crafting a story driven by performance and emotion rather than a narrative series of events. Cutting freely between the cinematic black and white images, we glimpse raw moments shared between the lovers against the endless desert backdrop. The camera moves around them naturally, documenting their magnetic, primal attraction as they move: on the desert floor, under a shower, on the bed.  It is that intangible feeling of the “only two people in the world” that Anthony Mandler so artfully captures through these raw, sensual vignettes.

One of the most sought-after music video directors of today, Anthony Mandler is a known for creating the brand-altering visuals for the biggest names in music, including Rihanna, Jay-Z, Beyoncé, Lana del Rey and Taylor Swift.  Recent years have seen Mandler burst into the advertising world with the same force, with global campaigns for high-profile brands including Lexus, Cadillac, Almay, Max Factor, 1800 Tequila, Nike, and Samsung.  He is represented by internationally renowned production company Believe Media for commercial work in the US and Europe, and continues to direct music videos under his own banner, Black Hand Cinema.