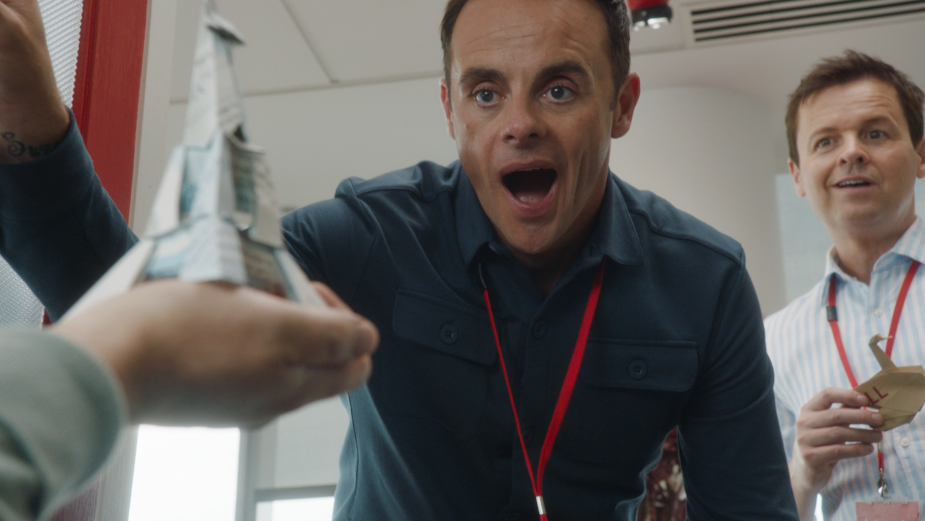 The ad called ‘Origami Bills’, continues the theme of the Effie Award-winning Bank of Antandec campaign, first launched in 2019, which contrasts crackpot banking solutions from Ant and Dec with more helpful products and services from Santander.

In the film, banking supremos Ant and Dec hatch a plan to help customers with their bills – by hiring an Origami Master to fold them into works of art. Meanwhile, Santander is actually helping customers by giving cashback every month with its 123 current accounts.

Dan Sherwood, director of marketing at Santander, said: “Seasoned banking CEOs, Ant and Dec are back on our screens, this time attempting to make customers feel better about household bills – by turning them into origami works of art. But while they pursue pieces of folded paper, we’re already helping customers feel better about their bills by giving cashback each and every month with our 123 current accounts.

Jo Moore, Engine Creative’s creative director, says: “Ant and Dec, fine bankers that they are, have a new sidekick - an origami master who they’ve ingeniously enlisted to help them with their next madcap venture. While they dabble with folded up paper, Santander, as usual, has a brilliant and sensible answer.”

The campaign was developed by Engine Creative and directed by Declan Lowney at Merman. Carat has planned a fully integrated media approach for the campaign, which rolls out on TV, cinema, radio, DOOH, social and digital from September 12th in the UK.