Another Cannes-tastic Year on the LBB & Friends Beach

Awards and Events 389 Add to collection

Thanks to our partners, new friends and old who made this year’s Cannes the best yet 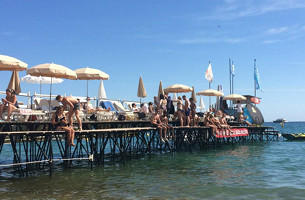 The mosquito bites are already healing up and the sunburn is starting to peel – Cannes is over, we’re back in the real world and there’s a whole backlog of emails that were lost in the abyss of what passes for online connectivity in the Riviera. But rather than feeling exhausted and drained, as we often do after Cannes, this year the Little Black Book team returned to the office pumped, full of energy and deliriously excited.

We caught up with old friends from around the world, made new ones and got talking with some of the most inspiring thinkers and do-ers in the industry. And at the centre of it all was the LBB & Friends Beach, which was like a beacon of sun, sea, rosé and great music and drew 700 people a day, all seeking out the chance to chill, chat and escape from the corporate hustle of the Croisette.

We couldn’t have done it without the help of our partners. Not only did they help us put together the finest swag bag of Cannes 2015 (AnalogFolk – your mobile battery pack was a life saver; The Studio’s colouring book of the Cannes jury members was inspired), they brought so much energy and extra fun (not to mention production management expertise – we are in awe of Rushes MD, Joce Capper, and her ability to whip a group of sweaty bag packers into a genuine production line). For those not content to lie on the sun loungers, there was plenty to do this year too – VR.SE gave many their first taste of virtual reality with demonstrations. There was Chris Milk’s much-talked about ‘Evolution of Verse’ and, for the braver, Guy Shelmerdine’s terrifying ‘Catatonic’ (a tour of a 1940s asylum, complete with wheel chair). Come happy hour, Native and Jungle transformed the place into a full-on beach party with DJ sets and live music (read more about that here).

So if you made it down to the beach please say thanks to all our brilliant sponsors, without whom the coolest spot in Cannes just wouldn’t have happened. I mean it, these are the people you need to thank for your Happy Hour rosé (and a lot more besides that!): Extreme Music, Groundglass, Rushes, LIA, Vagabond, Chesterfield Group, Jungle, Native, Simian, Bakery Films, Loveurope, The Good Film Company, The Studio, Farm Films, Cutting Edge, Glow Media, Getty Images, Adstream, Made In World, Felt Music, AnalogFolk, Mandarin Media, VR.SE, Chillibean & Cirkus.

In the evenings, the beach was just as lively. On Tuesday we held a secret supper club for the agency comms people - truly the hardest working people in Cannes. Wednesday was the ever-popular Rushes Party and on Thursday we co-hosted a dinner with Location Scotland and Rushes for some of the world's top producers.

If you’re suffering withdrawal, head to our Facebook page where we’ve got oodles of photographs from the past week. Feel free to tag yourself – and share any snaps you took of the LBB & Friends beach!

Looking back, the LBB & Friends beach was a brilliant physical manifestation of what we try to do every day. It was a community, full of fun, creative people, talking business and networking in the friendliest way possible. On Thursday, will.i.am said something at the &Partnership debate that really struck a chord – “If you don’t add value to communities in the future you probably won’t have a licence to be in that community”. I hope, whether online, through our social media channels or at real world events, that’s what we’re doing. Adding real value to the advertising and production community by providing a space for everyone to come together, find inspiration, new collaborators and friends.

I’m aware this is verging on the sentimental, but I really mean it.

See you on the Croisette next year!