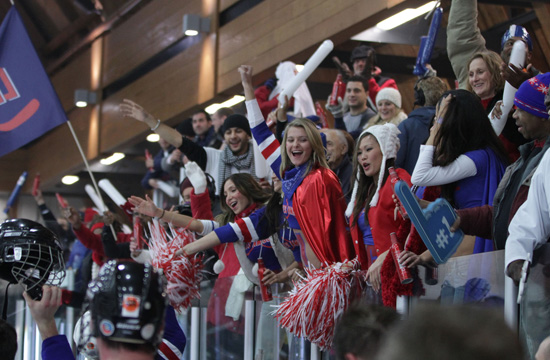 It's Thursday night and two local men's hockey teams are three minutes into the second period when a player makes a shot on net. For a moment he imagines he's in a pro hockey game, surrounded by hundreds of fans screaming his name as cameras film his every move.  Then, he realizes, he's not dreaming…

Best of all? The entire surprise was captured on film and will be used as Budweiser's 2012 Canadian Super Bowl XLVI commercial - aptly named "Flash Fans." More than 7 million Canadians watch the Super Bowl each year and on February 5, 2012, viewers nationwide will experience the awe of this once in a lifetime moment for the players, who took to the ice that night expecting nothing more than a regular game.

"Budweiser strongly supports hockey and Flash Fans was our way of honouring all of the passion and hard work of rec players. The ad captures the incredible excitement of a league game that has been elevated to new heights with all the elements of a professional game," said Ben Seaton, Marketing Manager, Budweiser. "The energy in the arena that night is palpable on screen. Once the fans rushed the stands, you can see the energy level of the players increase ten-fold. The emotion on their faces is priceless and the ad truly puts the viewer right there on the rink with the players."

From Amateur to Awesome:

The two teams - Les Amigos and the Toronto Generals - are part of a Toronto men's league and were playing a regularly scheduled game at Port Credit Memorial Arena in Mississauga, Ontario when the drama began. At first, the match began as usual - a few fans in the stands, nothing out of the ordinary.  But once the second period began, more than 500 fans - decked out in the teams' colours and even body paint - stormed the rink.  Bit by bit, the fantasy unfolded as television cameras and a giant jumbotron were revealed, along with mascots and trainers, while announcers called the play-by-play.

"At first, we had no idea what was going on," said Alex MacKenzie, Team Captain of Les Amigos. "As the game went on, we knew something really special was happening. The energy on our bench was unbelievable and for a brief moment we all felt like we were living the hockey dream. When we talked about it afterwards as a team we all felt that we had just experienced a bucket list event and we all felt very lucky to have been a part of it."

"As the excitement in the arena continued to build, so did our energy and our determination to win," said Joseph Papa, Team Captain of theToronto Generals. "There was no way we were going to lose this game!"

The game was full of drama including fights, a penalty shot and a tie game. In the end, the game went into overtime with the Toronto Generals winning 3 - 2.

Hockey lovers across the country can witness the wonder and thrill alongside these unsuspecting beer league teams by checking out the ad at www.youtube.com/BudweiserCanada.  A behind-the-scenes video that includes additional footage is also posted. Photos of the shoot are available at Facebook.com/BudweiserCanada.