Annex's Tundra* Animates 'The Great Race' to Help Save the Elephants 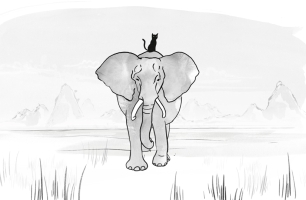 Tundra* and Annex Films have created a film with conservation group WildAid and Grey London. Together they have launched The Great Race  -  a short animated film with accompanying children’s book, which aims to educate the world on the plight of the African Elephant and to help ensure a future in which they can still see the great animal in the wild. It is part of WildAid’s Year of the Elephant campaign, which aims to build on recent momentum and make 2016 the year more elephants are born than killed, shutting down the illegal ivory trade once and for all and ending the years-long poaching war on elephants.

"I'm a complete animal lover so being given this script was really a match made in heaven for me. It's fantastic to be able to give our creativity and time to such a good cause - we really hope people open up their eyes and realise the importance of taking care of our beloved animals," says Tundra*s Karine Faou. "I had so much fun illustrating this film - and being given such artistic freedom to collaborate with the agency is quite rare these days."

The Great Race, a Sir Trevor McDonald-narrated online animation ,  is a twist on the ancient tale of the Chinese Zodiac, as told by elders at Chinese New Year and known by children all over the world. The traditional story of the ‘Great Race’ to decide the 12 signs of the Zodiac has been reimagined to feature a new animal for the first time since it was conceived thousands of years ago: an elephant, who needs our help now more than ever.

"Our technical process on this was very intuitive and creatively free. As this was such an emotional project I wanted everyone to be free to contribute with their own ideas and styles and therefore we kept the team very small - there was only 4 of us," says Tundra* director Espen Haslene.

The Great Race was devised by creative agency Grey London, written by Dominic Butler and Liam Riddler. It was illustrated, animated and directed by Tundra* and produced by Annex Films.

"Karine painted all the animals and scenarios by hand before handing over the key frames to the animators. We then built all the animation in the old school fashion of frame by frame animation and added all the elements for the backgrounds. The final step once we were happy with all the actions was to composite in the painted textures for each animal. All these also had to be animated frame by frame. But with such a great team - both here and at Grey London - it really has been an amazing experience making this short film. Really do hope that it's not too late for our elephants!"