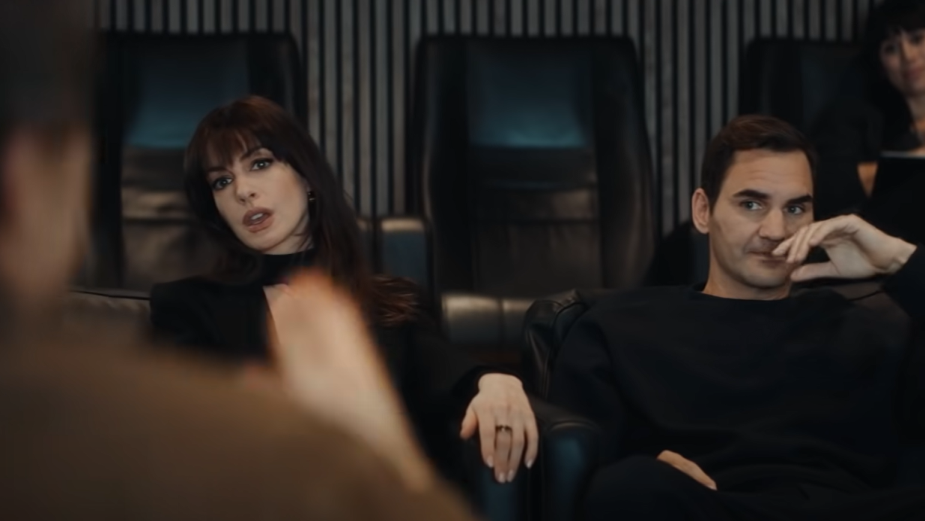 Last year’s 'No Drama' with Roger Federer and Robert De Niro was one of the ten most successful commercials worldwide. Swiss Tourism is now following it up with 'No one upstages the Grand Tour of Switzerland', named after the famous scenic route that condenses the best of Switzerland in an unforgettable road trip. Switzerland’s ambassador and most famous fan Roger Federer is on board once again.

After failing to convince Robert de Niro to appear in a commercial for Switzerland a year ago, he’s made it this time. With Oscar winner Anne Hathaway, a world-class actress is starring at his side.

But all happiness was premature: Roger Federer's second attempt to finally make a tourist film for Switzerland again ends in a huge disappointment. The US Hollywood star and the Swiss tennis champion see the result of their strenuous film shoot for the first time and realize to their horror that in the picture they are reduced to two small dots.

The capricious director provides an explanation: The Grand Tour is simply much more impressive than the two world stars. Or as the tagline of the film puts it: “No one upstages the Grand Tour of Switzerland.”

Roger Federer really enjoyed working with Anne Hathaway: "It was an absolute privilege to spend time with a global superstar like Anne. I was somewhat unsure of myself next to a talent like that, but she was able to give me a lot of tips and couldn't have been nicer ore more patient with my acting." For her part, Anne Hathaway has come out as a Switzerland fan: "Before we started filming, I was in the Swiss mountains with my family, and not only was it beautiful, but everyone there was so polite, nice, considerate and - it's actually true - very punctual."

The Director is a star, too

With Bryan Buckley, nicknamed 'Mister Super Bowl', one of advertising’s most successful directors could be won for the project. Nobody has achieved more Super Bowl success than the man from California. “With good ideas you get the best people. And with Bryan we not only found a great director who knows the ins and outs of Hollywood, but also a real team player who worked day and night with us on polishing and sharpening the ideas.” says Livio Dainese, co-CEO of Wirz.

The film is part of a global initiative to promote the Grand Tour of Switzerland. It is supported by various other campaign elements with the motto "I need the road trip of my life. I need Switzerland." The drive itself features all the diversity of Swiss nature. Naturally, it can also be undertaken in very sustainable fashion by electric car, as there are charging options all along the way. To make the Grand Tour even more unique, Roger Federer will be the official guide on the Alp’s most scenic route, presenting his personal recommendations. According to André Hefti, Chief Marketing Officer of Swiss Tourism, “Switzerland offers an unbelievable variety of experiences in a small area. It is long overdue for this road trip to be on the bucket list of our international guests”.