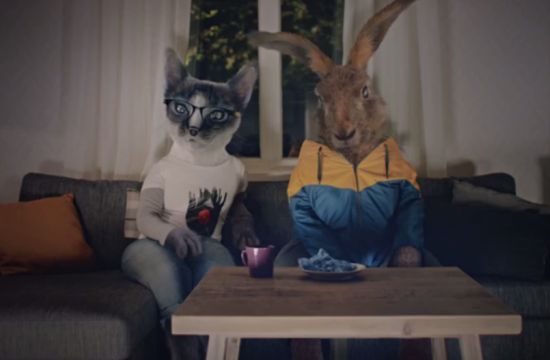 "While we have grown fast, we recognized the need for a strategic leap," explains Reins Grants, The Chief Marketing Officer for 4finance. "We needed to break from the perception of “for-emergency-only” category driven by product features, low brand image and usage barriers including fear of hidden costs and negative public opinion. Our change in advertising signals a deeper change and a next step for us. From urgent last resort to a normal, flexible life tool for all kinds of people. And with transparency, control and ease of use we are putting our customers first."

Conspiracy from JSC 4finance on Vimeo.

McCann Helsinki was appointed after an international agency pitch covering best-in-class creative and integrated agencies across 4finance markets. In the finals, McCann beat teams from Grey, DDB and Havas.

"We really wanted a jackpot. We wanted one concept and a proven ability to execute across all our markets, creative excellence, higher production quality and lower costs per country. McCann Helsinki nailed our vision with 'Money for Today's People' and has worked with world-class talent from Woodpecker Films and Fake Graphics to bring this vision into life in an exciting, and most importantly, effective and cost-efficient manner. We have now focused on the first campaigns out already in Poland, Czech Republic, Estonia, Latvia, Lithuania, Sweden and Denmark, and other markets will soon follow and planning for 2014 is right on track," outlines Toms Lembergs, the Brand and Advertising Director for 4finance.

Who believes ads? from JSC 4finance on Vimeo.

The McCann team led by co-creative leaders Timo Silvennoinen and Jyrki Poutanen have focused on bringing the vision of modern people into life with a little help from...of course…animals.

"With the goal of developing 4finance vision – being a modern financial tool for all kinds of people – we explored various creative routes to express our ideas in ways that would be both interesting and able to travel across different cultures. People who may perhaps look a bit like animals proved to be a good creative shorthand for all the different characteristics we wanted to convey. And they are easily understandable in all markets. Some people are fast, some are suspicious, some want everything really easy, some are smart all of whom we could respond to with our approach. We also found a perfect way to adapt the characters and master films with local nuances and voice-actors. So while the concept is international and uniform in execution, it all feels very local and tailored. "

McCann has partnered with Woodpecker Film and Fake Graphics for the ambitious production project for all markets including film, 3-D and animation. Both teams at Fake Graphics and Woodpecker Film fell in love with the characters and scripts from the very beginning and took on this demanding production as a challenge and a rare occasion to do something extraordinary.

Questionnaire from JSC 4finance on Vimeo.

"We were happy to see that the agency and client were on the same page with us as regarding the personalities of characters and the visual look of the films, so all we needed to do was to execute upon this common vision. In order to achieve a seamless integration of live action and CGI animation we needed to utilize the best talent on both fields. Therefore Fake and Woodpecker joined forces in planning, directing and executing the films. Our team at Fake took on this production with excitement. Doing all master films simultaneously with a wealth of lip-synced adaptations to different languages was an enormous task but by investing in proper pre-planning and technical research we were able to iron out most of the difficulties beforehand. I’m really proud of what we have achieved" says Ville Vaajakallio, Technical Director, Fake Graphics.

"It’s been one of the most exciting projects so far with lots of creative freedom. The nature of the project forced us to really polish the pipeline and think more than twice all the possible twists and turns to meet the tight schedule and quality. Directing these films was something you rarely get to experience and without a flawless production team, led by Anna Nuru and Hannu Kalliolahti, great actors and the ambitious crew we had, it would have been impossible," says Anssi Määttä, Director, Woodpecker Film.

'Money for Today´s People' is now being launched across the markets.