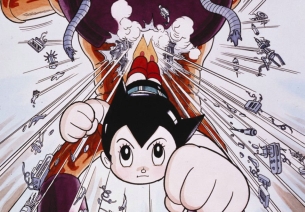 Astro Boy, known in Japan as ‘Mighty Atom’, first appeared as a Japanese manga series from 1951 to 1968 written and illustrated by manga pioneer Osamu Tezuka, who is considered the Japanese equivalent to Walt Disney.  Spawning additional manga series and multiple animated television series over the years, Astro Boy went on to become Tezuka’s most famous character, selling over 100 million manga copies worldwide and ranking as one of the greatest comic book characters of all time.  Astro Boy is also credited with inspiring generations of comic book writers and artists worldwide.

Zareh Nalbandian said, “It’s going to be a blast re-launching Astro Boy as a robot superhero for the new millennium. Known and loved universally, Astro is the embodiment of wish fulfillment for young and old, and we couldn’t be more thrilled to become a part of his iconic legacy.”

Mike Callaghan said, “Along with a vast catalog of stories and a rich universe of supporting characters, Astro Boy is one of the most endearing and enduring comic book characters of all time. We are beyond excited to partner with Animal Logic Entertainment to reintroduce audiences to one of the first great comic book superheroes.”