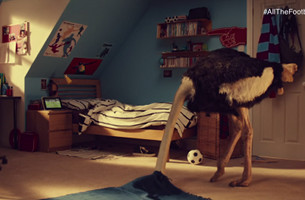 BBH London has created a new campaign for Virgin Media that focuses on the TV provider’s position as the only provider showing all televised football matches on Sky Sports and BT Sport, including ALL the Barclays Premier League and UEFA Champions League games.

The ad demonstrates that not all football fans watch the game in the same way. Some howl at the TV. Some gloat to their friends. Some watch it with rivals. And some can’t bear to watch it at all.

In addition to the 40 second TV ad, there is a 20 second edit available for online VOD services such as YouTube and ESPN. The ad campaign will also be featured across OOH, social media, print, online, radio and mobile platforms.

Kerris Bright, Chief Marketing Officer at Virgin Media, said: “Football fans are passionate about watching their own teams, in their own way. With Virgin Media they can experience as much of the beautiful game as they like by enjoying every single televised game at home and on a range of connected devices. If the football is on, it’s on Virgin Media.”

Both BT Sport and Sky Sports are available to Virgin Media customers through the Big Kahuna Sports bundle or through individual bolt-ons.

Media planning for the spot was handled by Manning Gottlieb OMD.