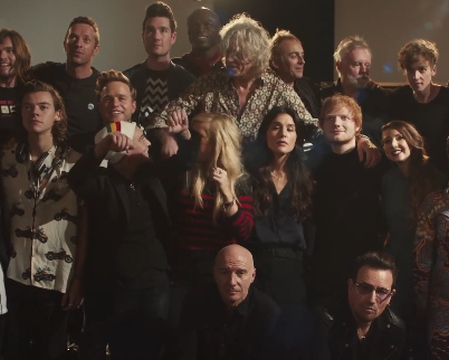 30 years on from the original and historic recording of Do They Know It’s Christmas? Sir Bob Geldof and Midge Ure returned to Sarm Studios in West London, the location of the original 1984 recordings, to record Band Aid 30, raising money for the current Ebola crisis in West Africa. The video was directed by Andy Morahan of Great Guns.

Last week Andy Morahan, director of iconic music videos including Guns N Roses November Rain and George Michael’s Faith, was asked by Sir Bob Geldof and Virgin EMI Records to come on board to shoot the video.  The track was recorded and the video filmed simultaneously on Saturday 15th November, both needing to be finished and delivered in time for a very special premiere on TV’s The X Factor within a heart racing 36 hours.

For Andy “this was a once in a lifetime opportunity to work with so many incredible artists. The level of talent in that studio was truly awe-inspiring. What Bob (Geldof) is doing is important and changes people’s lives. Ebola is killing thousands of people in multiple countries and has the potential to affect the whole world on a truly catastrophic scale. The incredible passion with which Bob approaches the Band Aid project is humbling and I am truly flattered to have been asked to be a part of it.”

Fans were able to follow the recording session by downloading the Band Aid app BandApp, which featured live footage from the studio.

It’s not unusual for music videos to be faced with tight turnarounds but achieving such a big project like this on the necessary time-scale was more challenging than most.

“Being asked to be a part of the Band Aid experience was an incredible honor for us” says Great Guns’ Executive Producer Sheridan Thomas. “The whole process, from recording and mixing the track to shooting editing and finishing the film, had to be completed within 36 hours, presenting us with a number of pretty unique technical challenges. The workflow within each and across all departments had to be absolutely seamless to make it happen. There was literally no room for error. I’m so proud of the Great Guns team and so thankful to many of our regular collaborators, like our two DOPs Tony Miller and Angus Hudson, for pulling off what initially seemed like an impossible feat without a single hitch.”

As well as collaborating with such talented artists, the Great Guns team had the joyous experience of working hand in hand with musical super producers Paul Epworth and Midge Ure.

Says Great Guns’ awarded music video producer Tim Francis, “Paul and his engineers were sensational. They helped us enormously with overcoming the many complicated technical challenges. We really could not have delivered a video in the time frame without them.”

One of the most prominent of these challenges was faced by Great Guns Editors James Demetriou, Nick Saunders and Will Cole who had the gargantuan task of cutting a video that could not even start editing until the rough mix of the track was delivered at 2am, only 15 hours ahead of the delivery of the film’s final master.

Laura Gregory, founder of Great Guns, adds “It felt very special for the whole team to be part of something so important. The Gunners team and crew pulled off the impossible. Let’s hope the money raised can do the same…”

Of course with all these amazing people in one building there had to be a few surreal moments. Among them, writer and director Richard Curtis popping into the studio to say hello and hand out Turkish Delight to an exhausted crew, and a rare, calm moment found one of the Gunners girls chatting with Seal over a cuppa as he practiced his lines.

The video was graded and finished at Rushes postproduction, and the tape was literally sprinted from their machine room to be premiered during the Sunday 16th November broadcast of The X Factor. The text donations during the program raised half a million pounds within an hour.

Within a few hours of its release, the single has gone straight to number one on iTunes.

All partners involved have given their time & services up for free to be a part of history.