Awards and Events 242 Add to collection

In an unprecedented double win, Y&R NZ has won the 'GRANDY' and GPY&R Australia has been awarded the 'GRANDY FOR GOOD'. 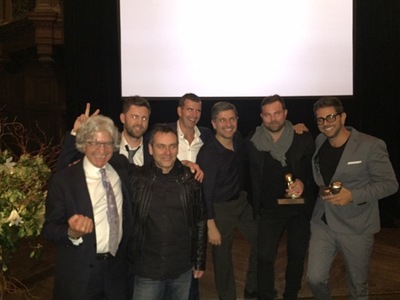 In an unprecedented double win, Y&R New Zealand has won Best in Show, affectionately known as the 'GRANDY', for Burger King's 'McWhopper', in the Corporate Responsibility category and GPY&R Australia has won the distinguished Richard T. O'Reilly Award for Outstanding Public Service, known as the 'GRANDY FOR GOOD' for Melanoma Patients Australia's 'Melanoma Likes Me' campaign which includes a $10,000 cash which will be given to the Melanoma Patients Australia charity.

Melanoma is the most lethal cancer for those aged between 15 and 30, so Melanoma Patients Australia and GPY&R Brisbane & Melbourne created an online persona for Melanoma to track who 'liked', 'followed', and commented on young Australians' social media activities, in real time. The application aggregated these posts and notified the social media team in real-time so they could respond with creepy messages from Melanoma. Unique Visits to the "Skincheck" mobile site during the 4-week campaign increased by 1371%.

It is the first time Y&R Group ANZ have won Best in Show at the ANDY Awards and the first time an ANZ-based group, or any network, has won both major prizes.

Says Ben Coulson, Y&R Group Regional CCO: "It's great (and slightly surreal) to see Australia and New Zealand take out the two top gongs, especially when you consider the calibre of work from all over the world competing here tonight. ANDY's is a famously tough show, they hand out very few prizes. A big thanks to our brave clients for

pushing the boundaries with us, and to all the talented folk back home who worked so hard on these campaigns."

From Seville, Spain, Colleen DeCourcy, global executive creative director of Wieden + Kennedy, led the global jury for the second year in a row to recognize the bravest, 'most perfect' creative work from around the world this year.

The GRANDY winner, Y&R New Zealand, receives the recognition of Best in Show along with a $50,000 cash award. As the first advertising award show of the season, The ANDY Awards predicts how the work places in subsequent awards shows throughout the year.

Says Josh Moore, CEO and CCO, Y&R NZ: "Gatorade 'Replay', Nike 'FuelBand', Chipotle 'Back to the start', and Marcel 'Inglorious Vegetables' - these campaigns were the absolute pinnacle of our industry in the years they won the Grand ANDY, so for McWhopper to be

recognised at that level in 2016 is an outstanding achievement not just for Y&R NZ, but for the NZ advertising industry as a whole.

"Whilst Tom Paine, Jono Key and myself are in New York to collect the Grand ANDY, full credit is due to the entire team back in NZ, across Y&R Media, creative, production, design, digital and account service. And our fantastic suppliers, Assembly, Flying Fish, Match, Liquid Studios, Mandy, and Resn. This was a huge team effort and a testament to an integrated offering at its very best."

To raise awareness of United Nations Peace Day, Burger King published an open letter calling for a 'burger wars ceasefire' with corporate rival McDonald's. Burger King proposed the two restaurants join forces to create a symbolic hybrid burger - the McWhopper. The letter invited McDonald's to learn more at mcwhopper.com - a hub of shareable content. When McDonald's contentiously turned down the offer, tens of thousands of people created and shared DIY McWhoppers online, further spreading the peace message. Meanwhile, four other restaurants got onboard, and together, the historic 'Peace Day Burger' was created and served on Peace Day 2015. The campaign ultimately achieved +8.9 billion impressions and increased Peace Day awareness by 40%.

The Best in Show student winner, and recipient of the Glenn C. Smith Award and Scholarship was director Djawid Hakimyar from Filmakademie Baden-Wuerttemberg in Germany for Wet Dream in the TV & Film category. Wet Dream shows that everyone has wild dreams, but it takes the support of others to make those dreams a reality.

The Bravery Award, an award that The ANDYs introduced during its 50th anniversary, honors the world's bravest marketers. This year, The Bravery Award winner was REI for the #OptOutside campaign, a standout in the Retail category, created by San Francisco agency Venables Bell & Partners.

Says Colleen DeCourcy, 2016 ANDYs jury chair: "Brave, creative work is not only able to impact us as an industry, but also as people. This campaign shows how REI operates on empathy for its staff and for its customers, using it to drive all business decisions, including execution of the brand's message, actions, products and services. Marketers like REI are leading us in the right direction and are exemplary of how we should operate as an industry."

As for the student winners, four of the five pieces of winning work were created within the 'Unconventional Advertising' course, founded 10 years ago by Frank Anselmo. Student winners included the School of Visual Arts, with half of the student wins and a total of 5 awards (2 Silver, 3 Bronze); Miami Ad School Madrid, with 1 Gold and the first student to ever be awarded within the ANDY professional category of RESET; Filmakademie Baden-Wuerttermberg, with 2 awards (2 Gold); and Miami Ad School Europe with 2 awards (1 Gold, 1 Bronze).

Says Gina Grillo, president and CEO of The AD Club of New York and The International ANDY Awards: "The ANDYs are driven by the best creative work our industry has to offer." As an industry, we need to keep pushing the boundaries of creativity and honor those leading the way. Colleen and our jury have set the bar high by honoring those who are daring and who are not afraid to support ideas and projects they care about."

The 2016 ANDY Awards Jury was a collection of the greatest creative talent in the world, who came together in Seville, Spain to deliberate over the best and bravest ideas from the past year. Of the 23 judges this year, 26% were women, and 61% were from outside the U.S.. They brought diverse backgrounds and perspectives to the forefront of the judging process in support of determining the bravery and creativity of all the entrants.