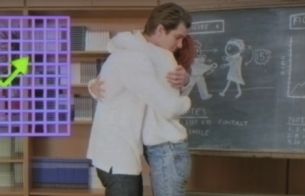 Andrew Garfield may have a busy fall, with the critically acclaimed “Hacksaw Ridge” just out and the upcoming Scorsese film 'Silence' already gaining Oscars buzz, but chances are you’ve never seen him like this: learning how to hug in a white turtleneck from the back of your closet. That’s because non-profit organisation Youth Mentoring knows few things beat a hug when it comes to increasing compassion and empathy. So it teamed up with production company Pomegranate Films to create the spot “Hug it Out!”

The short film shows Garfield and actress Jo Hart learning step-by-step how to give a hug, accompanied by Mr. Moviefone-esque narration and '90s elevator music. Because we tend to forget how valuable a hug can be, the PSA describes it like a new product, like an iPhone...or whatever products we used to buy before the iPhone.

LA-based creative duo Armen Perian and Rosie Geozalian wanted the spot to feel as comforting as a hug—and what’s more comforting than the infomercials and educational films children of the '90s grew up with? Their motto while creating the PSA was “worse is good”:  they deliberately chose awkward pacing, repeated actions, cheated angles and continuity errors to give off a distinctly '90s low-production VHS feel.

The short film shows that the longer the hug is, the higher the rate of empathy—so much so that by the end of their hug Garfield tells Hart, “Sorry I thought your idea for a Peruvian-themed alpaca waterpark was stupid.” That’s a good hug.

Youth Mentoring, an organisation helping at-risk youth in Los Angeles, is featuring the 'Hug It Out Challenge' on ChallengeMaker.com, where between November 14th and December 31st viewers can submit videos of themselves giving a 20-second hug, or they can donate directly to Youth Mentoring.