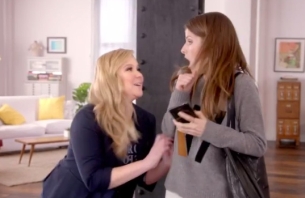 Venice, CA-based Backyard director Kim Nguyen concocts a one-way friendship between two comedy queens in the hilarious “Amy Schumer and Anna Kendrick,” for the MTV Movie Awards. The spot finds the apparently disinterested Kendrick being accosted by the fawning Schumer in preparation for hosting the MTV Movie Awards.

As Schumer expresses her excessive giddiness for her new “friend” by firing a barrage of random and ill-informed questions at Kendrick, the Pitch Perfect star reacts in disbelief before being nudged into an impromptu (though obviously arranged) “cups” performance that turns out to be a game of pong that goes immediately and hilariously wrong.

“It was great to work with such a variety of comedians and actors in the campaign,” notes Nguyen. “It’s fun leading them into different directions and providing an environment where they are willing to take chances and bring something different to each take. That collaboration really opened up so many funny possibilities that our entire crew was holding back laughter take after take.”