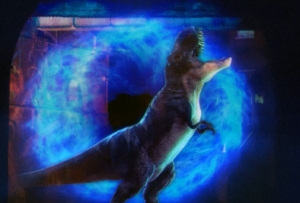 Last night, in the cold and gloomy tunnels of London Bridge, Pepsi Max gave unsuspecting commuters an unbelievable experience using the latest in augmented reality and stereo projection technology.  What at first appeared to be an ordinary tunnel quickly transformed to reveal giant portals in the space-time continuum, shocking and surprising passersby as prehistoric dinosaurs and futuristic cyborgs appeared out of thin air.

The latest installment from the Pepsi Max’s Unbelievable campaign captures the reactions of those caught-out by the augmented reality tunnel.

Taking the public through the ages, Pepsi Max created a unique piece of equipment to manipulate the real-world environment. A fine gauze partition was stretched inside the tunnel on which advanced animations were projected.  Clever use of lighting, set dressing and perspective effects allowed for the technology to be hidden whilst being startlingly realistic.