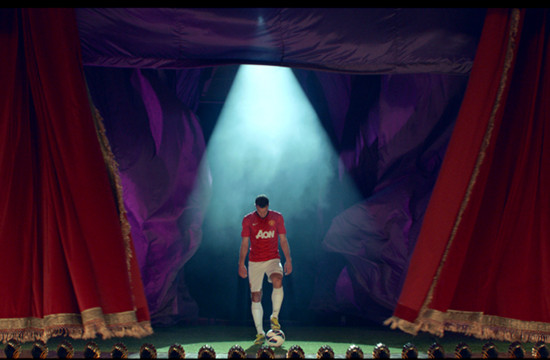 BT Sport’s advertising campaign will hit television screens for the first time today and will reveal the exciting and accessible personality of its new channels.  The campaign is set to illustrate BT Sport’s impressive content offering and showcase a wide cast of sporting talent through a series of spectacular set pieces.

England rugby stars Owen Farrell, Joe Launchbury and Manu Tuilagi will usher Jake through a fierce rugby game to presenter and broadcaster Clare Balding who is chatting to footballer Rio Ferdinand. Jake will then encounter Arsenal captain, Thomas Vermaelen, and England and Liverpool’s Daniel Sturridge, who are sprinting inside giant wheels which power up a huge red ‘LIVE’ sign. The action concludes with Jake arriving in the BT Sport studio and a pillar of TV screens lighting up the darkness to show some dramatic action from Barclays Premier League Football and Aviva Premiership Rugby players. The glow from the screens will reveal a vast studio audience seated around the hub of the BT Sport studio. Viewers will then see an end frame: BT Sport, Great sport happens here.

David James, marketing director for Consumer, BT Retail, said: “The new series of adverts for BT Sport will showcase the great range of live sporting action and the amazing deal we are offering, especially to BT broadband customers.  We hope the glimpse behind the scenes of our new sports studio with our great line up of presenters will really whet sporting fans’ appetite for what’s to come.”

The TV ad was directed by Martin Krejci.  The campaign was created by AMV BBDO and media bought by Maxus. The soundtrack is Wor by Django Django.

The new television campaign will be supported by a national outdoor advertising campaign featuring BT Ambassadors, Gareth Bale, Robin Van Persie, Alex-Oxlade Chamberlain, Georgios Samaras, Owen Farrell, Chris Robshaw & Manu Tuilagi. There will also be press and digital activity focused around key sporting dates over the next month.  The campaign will have a strong focus on social media with activity across Facebook, Twitter and Youtube counting down towards the launch of the BT Sport channels with rewards and exclusive content for fans.

BT Sport has the rights to show 38 exclusively live games a season from the Barclays Premier League, including 18 of the top picks, and has also secured the rights to live top tier matches from Serie A in Italy, Ligue 1 in France, Brasileiro in Brazil and Major League Soccer in the US.

BT’s acquisition of ESPN’s TV channels business in the UK and Ireland will also bring the rights to show live games for the 2013/14 FA Cup with Budweiser on ESPN, Scottish Premier League, UEFA Europa League and the German Bundesliga.

BT Sport will also exclusively show up to 69 live rugby union games from the Aviva Premiership. In addition, BT has signed a deal with the Women’s Tennis Association (WTA) to show live tennis from 21 global tournaments, including the TEB BNP Paribas WTA Championships.

The BT Sport channels will be based at the iCITY development at the Queen Elizabeth Park in Stratford.

The advert will invite viewers to sign up to BT Sport via www.btsport.com  or by calling BT.