New outdoor campaign aims to get viewers closer to the action 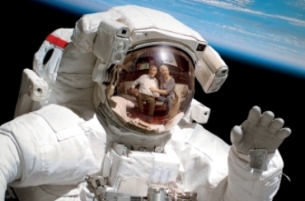 This week sees the launch of AMV BBDO’s new OOH campaign created for Currys PC World. The 4-week campaign was created to showcase Currys PC World’s range of 4K televisions and what the technology can do.

4K technology gives viewers up to four times the detail of 1080p Full HD. This means when watching Ultra 4K HD (UHD) content, what they watch is more realistic, more life-like, and lets them feel four times closer to the action, as though they’re witnessing it first-hand. The three posters in this campaign showcase imagery that you would watch on TV (i.e. an epic space movie or a wildlife nature documentary) in amazing detail. Look a bit longer and you’ll spot a reflection within the footage of people sitting at home on their sofas, watching this incredibly detailed and life-like footage– dramatising how watching programmes in 4K lets you really get four times closer to the action.

In the first execution, ‘Spaceman’, you see an astronaut in space, with Earth’s outline just behind the astronaut. In the astronaut’s helmet you see a reflection of an older couple watching the footage, their reactions are total amazement – as if they’re seeing it all first hand. They’re really watching it on their 4K television in their living room.

In the second execution you see a small tarsier in its natural habitat. In both of the eyes of the tarsier you see a reflection of a family watching the tarsier, awe-struck by what they are seeing – again as if they’re seeing it first-hand.

In the final execution, you see a fighter pilot, flying his aircraft upside down.  In the reflection of the pilot’s visor you see a young couple watching the pilot, totally engulfed in what’s happening – as though they are there.

In all these cases, they’re really watching it on their 4K television in their living room.