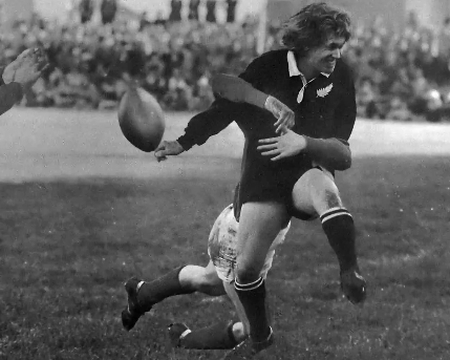 Ahead of the upcoming Autumn Internationals, Guinness is releasing four pieces of content to rally the fans of each of the Home Nations. Jonny Wilkinson, Shane Williams, Bill McLaren and the Munster team of 1978 will be celebrated in a new Guinness ad campaign; which will air for the first time on TV in the UK and Ireland on 5th November 2014.

Guinness has a long-standing association with rugby, as sponsor of all four Rugby Unions; Scotland, Wales, England and Ireland. Rather than focusing on the physical attribute of brute strength normally found in rugby adverts, these four films look to inner qualities like humility, dedication, self-belief, and irrepressible spirit. It is the triumph of these qualities that we celebrate and which have helped the ads hero’s leave a lasting mark on the game.

Jonny Wilkinson: Merci; focuses on the great fly half’s humility, dedication to the game, and relentless resolve to bounce back from a raft of injuries, leading to him being as well-loved in Toulon as he is in England. Shane Williams: Mind Over Matter; celebrates the Welsh winger’s determination to prove people wrong after he was told he was too small to make it in rugby. Bill McLaren: Irrepressible Spirit; looks at how the legendary commentator overcame tuberculosis, which cut short his playing career, and found a way back to the game he loved to become the Voice of Rugby. And Munster: David and Goliath; retells the historic victory of Irish team, Munster, over New Zealand, during which a group of ordinary men defied circumstance to achieve something extraordinary.

Stephen O’Kelly, Guinness Marketing Director; Western Europe said: “We have a long and proud association with rugby. These stories demonstrate the inspirational character and integrity that is central to the sport and the values of the Guinness brand.”

The adverts form part of the biggest Autumn International campaign for Guinness to date, which will see below the line activity taking place in over 3,000 pubs in Great Britain. Outlets will be provided high visibility items to draw consumers into the pub and the rugby occasion on matchdays, items include 10ft inflatable rugby posts, rugby hats, tap handles, fixture posters and staff shirts.