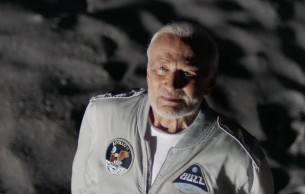 This winter, Quaker Oats, the nation’s favourite porridge brand , is launching an innovative new TV campaign to showcase the benefits of eating oats. Airing for the first time on 1st November and running for four weeks, the new TV creative tells the extraordinary story of how when astronaut Buzz Aldrin became the second human being to ever set foot on the surface of the moon, he did so with porridge in his stomach.

Quaker Oats has been in existence for nearly 140 years and the 30 second creative clearly shows how this heritage brand has been stirred up in the pages of history. The advert features Buzz Aldrin watching original footage of the 1969 Apollo 11 mission and recounting how he set himself up with porridge when he walked on the moon. It ends with the famous astronaut eating a bowl of warm Quaker Oats followed by a stand still image of the Quaker Oats logo.

Jeremy Gibson, PepsiCo UK Marketing Director, comments: “Buzz Aldrin is such an incredible man who has achieved so much in his life and we are excited to be collaborating with him in our latest advertising campaign. On the day he walked on the moon, he chose to eat oats and we want to use the advert to highlight the beneficial role that Quaker Oats can have as part of a healthy lifestyle.”

Advertising agency AMV BBDO is responsible for the development of the TV creative. The agency tracked down some NASA archive material in which Buzz Aldrin and fellow astronaut Mike Collins banter about how much ‘oatmeal’ Buzz ate on Apollo 11. Tony Strong, copywriter at AMV BBDO said: “It turned out Buzz himself had never heard the original clip before. He was such a pleasure to work with - at 86, still tirelessly energetic and passionate, and a genuine porridge enthusiast: a great first advocate for the Mighty Oat.”