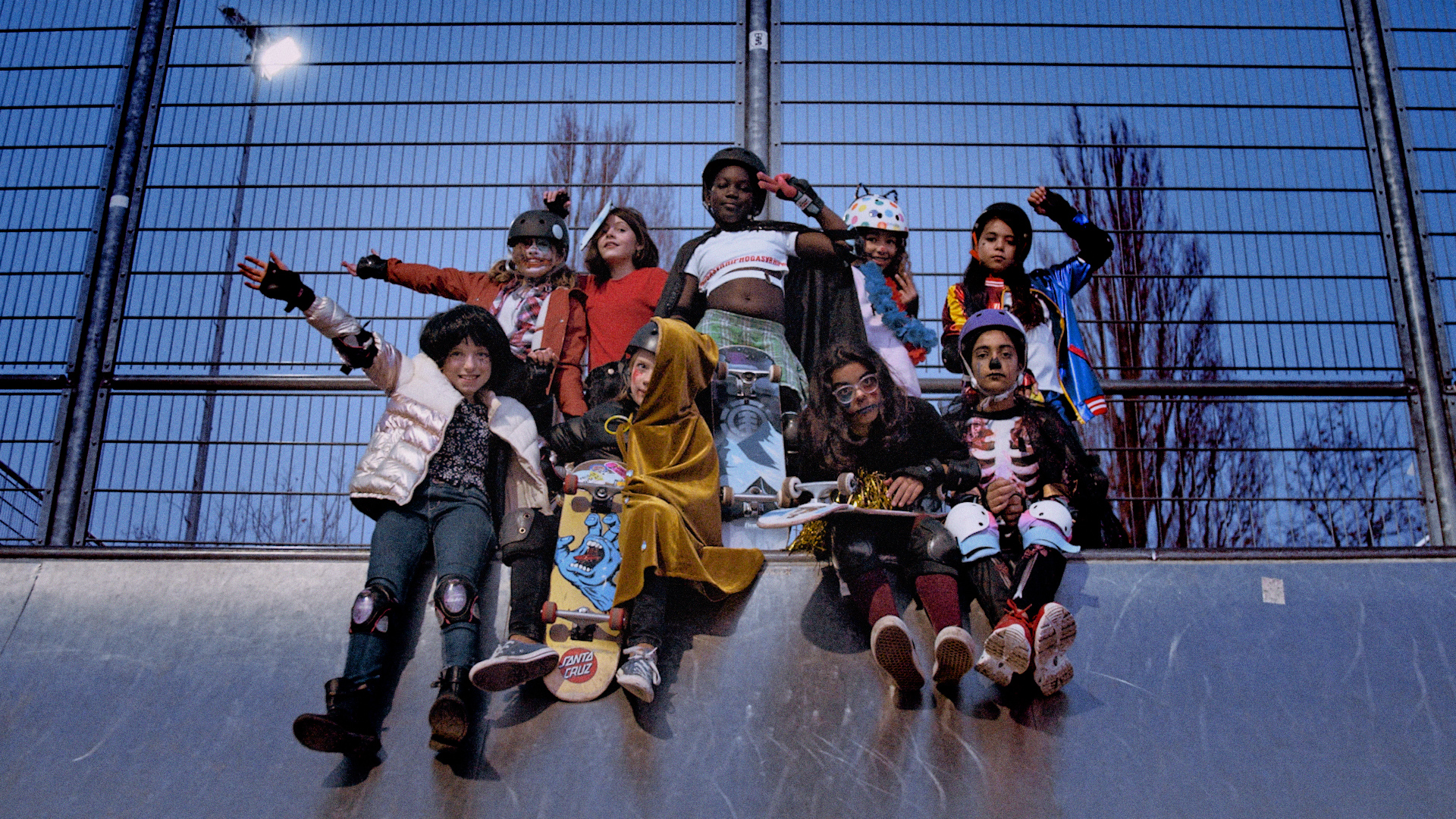 UK born, Amsterdam-based Al Lewis directs ‘How To Be A Roll Model’ – very much intended pun –, a documentary about Amsterdam’s youngest girls skate crew. The film is an ode to freedom, friendship and straight up badass female power following a group of 8-14 year olds through the skatepark, getting a glimpse into their lives. They fall, they goof around, they land tricks. Everything you would expect from your regular skate video. Except for a few things.
Women are a rare sight in skate films. Girls are an even rarer sight. A skate film directed by a woman, created and shot almost entirely by an all women and non-binary crew and creative team, in collaboration with a girls skate crew is, unfortunately, still very rare. When Mérida Miller, the girl's coach and founder of the Dutch non-profit Project Fearless – after-school activities for girls in Amsterdam, with a focus on bravery, leadership and community impact – noticed that she couldn’t find any trick tutorials led by women to send the girls during lockdown, she decided to put together a crew and make a film for the girls, with the girls. So the next time a girl or non-binary youth was looking for a skate film, they’d find someone who looks like them with an invitation to the skate park.
Most girls grow up exposed to narratives of scarcity, building up on the idea that, when it comes to  women, opportunities are a finite pie – so when one of us takes a piece of it, that leaves less for everyone else, creating a dynamic that thrives on fear and competition. This is not any different in the skate world, where only the best of the best female identifying skaters seem to be getting a seat at the table, perpetuating the narrative of this sport being unattainable for girls, often keeping them away from trying. But you don’t need to pick up a skate magazine to see that – just walk into the skatepark and you’ll see that  there are almost always no women’s toilets. A pretty straight forward message. ‘How To Be A Roll Model’ addresses this problem in powerful ways and hopes to ignite change within the skate community, by empowering girls and women around the world to skate.
Founder of Project Fearless, Mérida Miller, says: “If you’re a guy at the skatepark, there are tons of different people to look up to and learn from. No matter where you are on your learning journey, whether you just started skating or if you've been skating for years there are plenty of people who look like you filling in those gaps from very beginner to the pros. The term "bridging the gap" is overused, but that's what this is. Creating role models for every step, filling those gaps between Sky Brown and someone who just picked up a board. Creating accessible role models for other young girls.
We talk a lot about role models at PF and how anyone of any age can be one. I wanted to create a place where young girls actually saw themselves and not just highlight the best tricks but celebrate the learning process while making room for others to do the same.”
Director of ‘How To Be A Roll Model’, Al Lewis, says: “Growing up as a self confessed tomboy, I wished for an initiative like this when I was young. I’d never really filmed with kids before and was a bit nervous about how they’d be as contributors, but meeting the girls for the first time, I was bowled over by their energy, kindness and their willingness to learn. It was so much fun to make because of this and their open honesty and (at times hilarious) view on the world. I’m really pleased we managed to make a film that captures the bubble the girls feel in when they’re skating.”
A group of girls 9-14 skating is also a group of future women owning themselves and taking up spaces that socially were never given to them – a lesson that lots of women weren’t lucky enough to learn at a young age. A group of girls fearlessly rolling down ramps twice their size is pretty badass, and knowing that they aren’t afraid of stepping into a skatepark is both an inspiration and an invitation for others to do the same. A group of girls feeling free and happy, supporting each other, and encouraging others to join them is everything that is right, and definitely a roll model to every female and non-female identifying human out there.