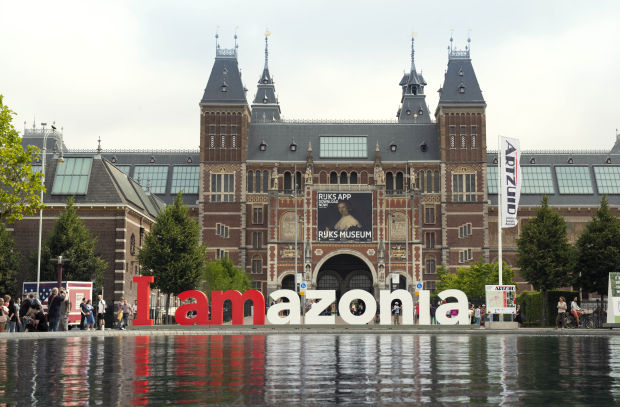 It’s only when something is gone that we realise how much we miss it. With this in mind, Greenpeace brought back one of Europe's most photographed tourist attractions - the giant 'I amsterdam' letters which previously stood in front of the Dutch capital’s world-famous Rijksmuseum - as ‘I amazonia’. The replica sign aims to draw attention to another landmark vital to our survival which is disappearing in front of our eyes: the Amazon rainforest.

When the original ‘I amsterdam’ letters were removed in December 2018, an outcry went through international media. The letters have been one of the most instagrammed, photographed, and recognised landmarks in Europe, familiar to millions of people worldwide.
Duval Guillaume tapped into an idea that is as smart as it is simple: a stunt in which the iconic red and white 'I am' letters are put back in their original spot, with a modified spelling:‘I amazonia.’
Coming in at 23 meters wide and 3 meters high, the ‘I amazonia’ installation is an exact copy of the original tourist attraction that was removed by the current city council. However, Greenpeace’s ‘I amazonia’ letters, aim to draw attention to another icon that is being removed before our eyes, the Amazonian rainforest.
Sigrid Deters, forest and biodiversity campaigner at Greenpeace Netherlands said: “Our capital city's iconic ‘I amsterdam’ sign, set in front of the Rijksmuseum, drew the admiration and camera lenses of millions of people worldwide. By bringing it back in altered state as ‘I amazonia,’ Greenpeace not only calls for the urgent protection of the largest remaining rainforest in the world, but also sends a strong message of solidarity to the Indigenous People and traditional communities who are protecting the Amazon against deforestation."
Under the leadership of President Bolsonaro, the Brazilian government plans to open up the Amazon forest for exploitation. Unlike the ‘I amsterdam’ sign, the Amazon forest is an iconic place the world cannot afford to lose. Because if we lose the Amazon forest today, we will lose the fight against climate change forever.
Koenraad Lefever, creative director at Duval Guillaume, said: “Although the conversation about the climate is omnipresent today, it is striking that the focus on deforestation of the Amazon rainforest in Brazil has faded into the background. However, "further deforestation of the Amazon forest will not only be a scar for Brazil, but will increase the impacts of a climate breakdown."
view more - The Sustainability Channel