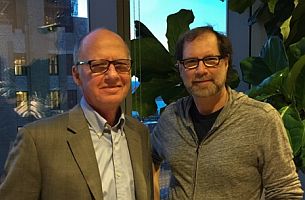 The AMP Awards is giving back in a way that helps the people who make the music. Sponsored by the Association of Music Producers, the awards programme has announced plans to donate a portion of the proceeds from its 2016 competition to the New York-based Musicians Foundation.

Founded in 1914, the Musicians Foundation addresses the chronic financial insecurity so prevalent in the music industry. The Foundation helps musicians nationwide and across all genres in a variety of ways, such as helping young artists overcome misfortune and stay on track as professionals; helping mature artists continue to perform, teach and pass on their musical legacy; and ensuring that musicians live out their final years with dignity and financial security. It also provides crisis relief to musicians in the wake of unexpected hardship or natural disaster.

Andrew Bloch, Managing Partner at human in New York (at right in the photo above), who’s active in AMP affairs and sits on the board of the Musicians Foundation board, played a key role in bringing the organizations together. “The partnership between the AMP Awards and the Musicians Foundation is a perfect fit,” says Bloch. “This high-profile industry event at which we celebrate the outstanding achievements of composers and musicians provides a unique opportunity to raise public awareness of the Foundation’s mission in supporting musicians and their families in need. It’s a win-win for both organizations.”

The new relationship will be formally launched with the presentation of a special trophy at the upcoming AMP Awards event, set for May 11th at City Winery in New York. In attendance will be executives from ad agencies, music production companies, record labels and music publishers, providing the Musicians Foundation with an ideal platform from which to share its story with an influential audience of potential benefactors.

“The Musicians Foundation is deeply honored to be recognized with this award from the Association of Music Producers,” says B.C. Vermeersch, Executive Director of the Musicians Foundation (pictured above with Bloch). “This relationship is a natural extension of AMP’s mission to address the common goals and concerns of those who make their living through music. We’re grateful to be able to broaden the conversation of what this industry can collectively do to support musicians and their families in times of need, a cause we have been passionately dedicated to for over 100 years.”

Beyond just providing direct aid, the Foundation also partners with other nonprofit organizations and musicians’ unions to extend its reach deep into the musical community. Among these are the Actors Fund of America, the American Federation of Musicians, the American Guild of Musical Artists, the Bagby Foundation for the Musical Arts, the Episcopal Actors Guild, MusiCares, the Rhythm and Blues Foundation and The Jazz Foundation. Its team meets regularly with these groups to strategise about how best to serve its clients, pooling available funds and sharing information and social services in an effort to multiply its impact.

Helping shape the Musicians Foundation’s policies and goals is its Advisory Council, which works directly with the Foundation’s leadership and includes such noted artists as Joshua Bell, Wynton Marsalis and the composer/songwriter team of Kristen Anderson-Lopez and Bobby Lopez, whose credits include music and songs for “Avenue Q,” “The Book of Mormon” and Disney’s “Frozen.”

The AMP Awards is the ad industry’s annual competition for outstanding work in music and sound for all media. It honors work in a variety of categories, including Best Original Song, Best Original Score, Outstanding Adaptation / Arrangement, Best Use of a Licensed Pre-existing Song, Most Effective Use of Music in a Campaign and more. In addition to its presentation to the Foundation, AMP will also induct an iconic brand into its Hall of Fame at City Winery. Past honorees have included such marketers as Coca-Cola, McDonald’s, Budweiser, Nike, Chevrolet and Pepsi.