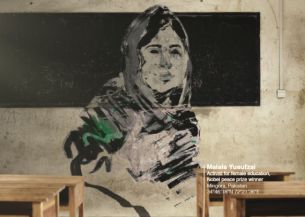 Animation company Eallin has created a film for Amnesty International to celebrate the 70th anniversary of the Declaration of Human Rights.

The document signed by Eleanor Roosevelt on the 10th of December 1948 became known as the 'Modern Magna Carta' and ushered in a new age of international cooperation and hope.

In this, Eallin’s third film for Amnesty, award-winning animation director Mustashrik Mahbub created a celebration of history’s great, global human rights heroes from the iconic names such as Nelson Mandela and Gandhi to the lesser known names such as Narges Mohammadi and Liu Xiaobo. The men and women who went on to make manifest Eleanor’s dream of universal human rights. The brave individuals to whom we owe our current freedoms.

The aim was to swell the hearts, lift the spirits and inspire the actions of everyone who watched the film. The challenge, however, was to create this feeling of a global celebration, without actually filming the 30 locations around the world from bleak emptiness of Evin Prison in Iran to lush forests of Intibuca in Honduras.

To do this, Eallin worked closely with Getty Images to source the best still of all the locations, then brought each to life using 3D camera projections and detailed post production so that the film traverses the contrasting environments that formed its heroes.

Music would play a crucial role in the narrative. Eallin and Mustashrik worked closely with MassiveMusic to find and record the perfect track, a ‘90s hit song “See the Lights” by Simple Minds that was subsequently re-recorded by MassiveTalent’s St. Solaire.

The resulting song, haunting but uplifting, proves a perfect accompaniment to this contemplative film.

The film and accompanying single will be released on Monday the 11th of December to coincide with the momentous anniversary of the Universal declaration of human rights.

The team at Eallin caught up with Mustashrik to find out more:

Q> How did you feel when you were approached with the project?

Mustashrik> I was very honoured to be asked to step into this project of creating a film for Amnesty International’s campaign to mark the occasion of the 70th Anniversary of the Declaration of Human Rights - it’s a cause I really believe in and have always wished to help contribute to in the only form I know how, which is through craft and creativity.

A huge daunting task lay ahead of me, but it felt very natural to step into it - I’m very grateful for the opportunity and production support I’ve had from all ends of this endeavour. My producers and crew have been nothing short of fantastic.

Q> What was the journey exploring the stories of the heroes and Eleanor Roosevelt?

Mustashrik> The journey has been an incredible learning experience, discovering amazing individuals around the world that have played big parts in standing up for the basic human rights we all should be aware of and have.

There’s a tendency to get stuck in your own echo-chamber, which is understandable. But this exploration’s goal is to reopen the eyes to the bigger, global plight. Hopefully it will remind everyone of the amazing work that has been, and is being, done around our world with the hope that everyone joins in to make their own marks.

Q> What was challenging about the brief and how did you solve these problems?

Mustashrik> The challenge was there from the beginning - how to tell a passionate and moving story about all these select Amnesty heroes, in a respectful way that would also present contextual information while not being too fact-heavy.

So it was a process of chipping the many themes down into one presentable visual direction, distilling the complexities of all these heroic individuals endeavours. After reading and hearing about Amnesty’s ‘Brave’ campaign, I struck upon the idea of using paste-ups of portraits in specific global locations relevant to the heroes, in a realistic and sensitive way that would capture the energy, defiance and bravery associated with the ‘street-art’ genre. A nicer way to honour individuals perhaps.

Q> How did the Post-production technique allow you to realise your vision?

Mustashrik> To describe the process in a simple way - it’s a bit like painting a canvas, layer upon layer - where pre-production planning is vital.

This is a totally mixed-media film, and reminds one of the amazing breadth of what we can communicate when we truly mix the media of real footage, photographs, 3D builds, hand-drawn art and 2D animations.

This specific post-production and VFX technique has been essential to capturing the feeling, mood and representation I was after. The production company Eallin, with all its skilled digital artists, have been fantastic, making it work in a very short space of time and responding to my perhaps overly-ambitious demands!

Q> How did you approach the music brief?

Mustashrik> I wanted to find something beautiful, in both music and lyrics, which would add another layer of intelligence to the film’s message - to be brave and to see the light since each individual is a shining beacon.

I scoured the many classic records and singer-songwriters and eventually stumbled across Simple Mind’s “See The Lights” at 2:30AM in the morning while brainstorming. I new immediately it was the one to re-version. It just felt right.

Q> How did Massive Music solve the music brief?

Mustashrik> Massive Music have been true legends throughout, taking on my brief and smashing it out of the ball-park.

It’s been a really lovely process of gift after gift. They took my notes and references and came back with artist suggestions (Massive represents a roster of very talented new musicians) which I was able to select from.

After this selection they went about re-recording the track to the cadence, pace and suggestions I’d laid out with given references. I can’t speak any higher of Massive. What a gift.

Margaret Atwood and Penguin Random House Fight Censorship with ‘Unburnable’ Edition of The Handmaid’s Tale
The Embassy Promotes Danielle Kinsey to Head of Production
Why Heineken’s Latest Launch Shows the Key to the Metaverse is Meta-Humour
The Future of... Boredom: 5 Types of Boredom and How to Focus on the Most Creative Kind