Awards and Events 223 Add to collection 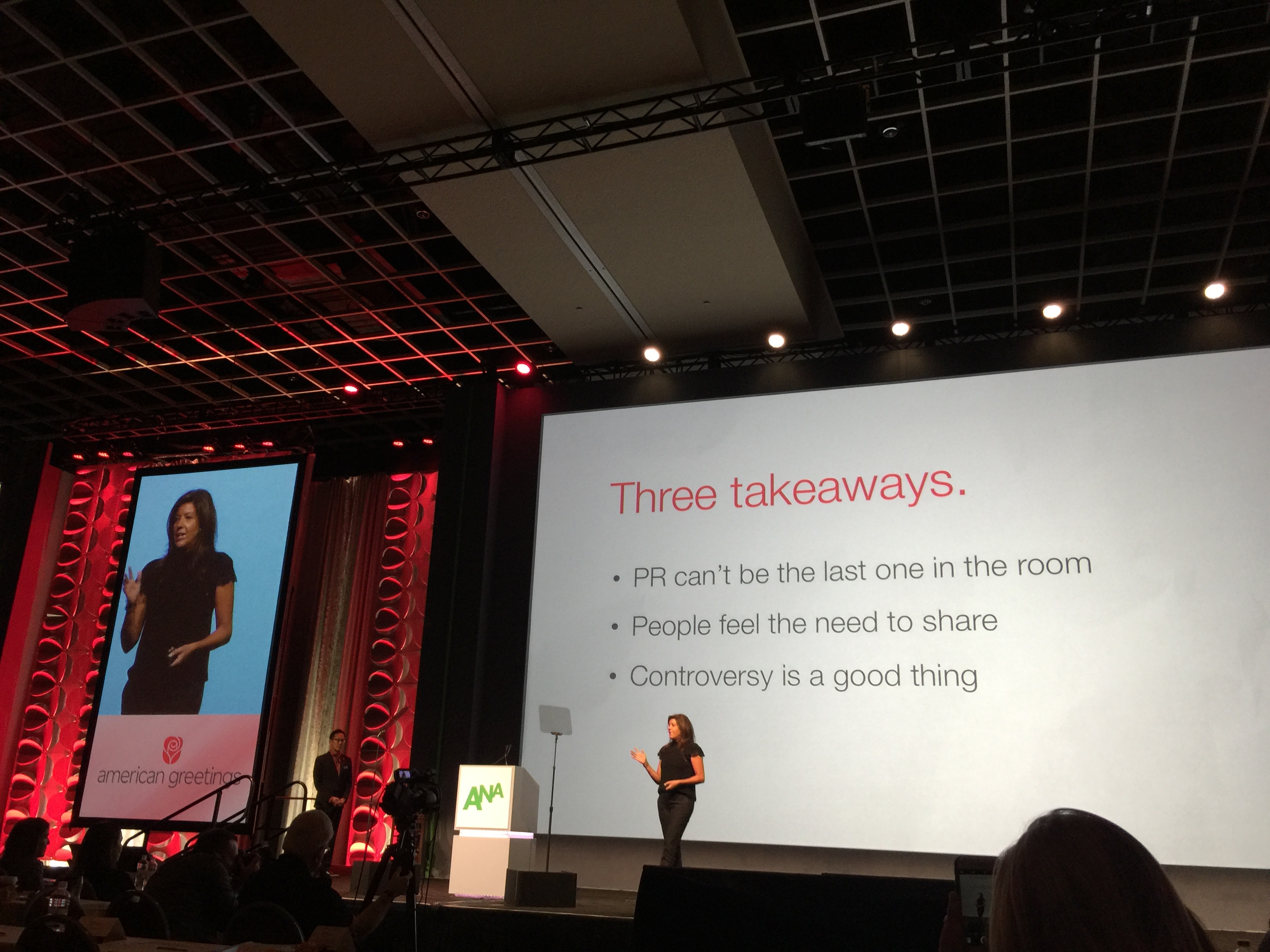 The 2016 ANA Masters of Marketing Conference, one of the media and advertising industry’s principal annual events, took place last week in Orlando, Florida from October 19 – 22. Attracting upward of 3,000 attendees, a variety of presenters and delegates including best in class Chief Marketing Officers to key industry players gathered to listen to the industry’s most notable talent present their success stories, and the unique ways in which they have created brand and business growth for their respective organisations.

On Thursday, October 20th, Alex Ho, Executive Director, Marketing of American Greetings and Kristen Cavallo, Chief Growth Officer of MullenLowe U.S. presented together on the topic; Changing Minds by Winning Hearts – Leaning Into Cultural Tensions for the Big Idea. Their session revealed how a 110-year old paper greeting company embraced change to its benefit – transcending small budgets amongst other challenges to create brand relevance and to remind consumers of the power of connection. With their mission: “make the world a more thoughtful and caring place every single day,” American Greetings and MullenLowe U.S. built campaigns such asThe World’s Toughest Job, The ThankList, and Analog@SXSW that were featured during the presentation, demonstrating the importance of what gaining an unfair share of attention means for brands:

World’s Toughest Job: The only way to get the world to appreciate and respect the job of being a mom was to treat it like a real job. By creating a (fake) job posting and filming interviewee’s raw reactions when hearing that the world’s toughest job was being a mom, this YouTube video helped people around the world remember why “mom” is so worthy of appreciation on Mother’s Day. Winner of the 2015 North American Grand Effie Award and the 2016 Cannes Lions Creative Effectiveness (Bronze) Award, American Greetings has seen a 22 percent increase in card sales and 160 percent increase in new web visitors YOY since the campaign launched.

ThankList:  95% of Americans believe we have a serious civility problem. Maybe the remedy for a rude world starts with reminding people to say two simple words: thank you. With this in mind, American Greetings and MullenLowe U.S. decided to go out into the world and see if they could make things just a little bit better. It all started with a bucket list-like idea called The ThankList. Enlisting the skills of Academy Award-winning filmmaker Barbara Kopple, five real people were documented, each creating and fulfilling a personal ThankList (a list of people you want to thank for shaping you as a person). People could then join in and make (and share) their own digital ThankLists at www.thanklist.com. Each journey was different. Every connection was powerful.

Analog@SXSW: To bring to life its ethos of creating real, more meaningful connections, “Analog by AmericanGreetings” was created as a live experience that turned everyday high-tech behaviors into tactile activities. And it all took place at SXSW Interactive, the world’s largest digital festival and the very last place anyone would think to see a greeting card company. The activation generated more than 4,000 visitors in three days, 1,200+ cards sent, 25+ minutes (avg.) time spent participating,and 138M+ media impressions. To top it all off, Analog was named a Top 5 Experience at SXSW by publications Forbes, CNBC, FastCo Create, The Guardian, USA Today and Adweek.

The examples of work shared by both Ho and Cavallo had the audience in laughter and tears, testament to the powerful approach of communications grounded in behavioral insights. This has enabled American Greetings to connect with people like no other brand within the category. Ho and Cavallo further identified a few learnings for those in the audience:

Kristen Cavallo remarks, “We hit the client jackpot with American Greetings. Yes, they are a greeting card company, but they are way more than glitter and rhyme. Their mission to make the world a better place and their willingness to lean into cultural tension sets them apart from their competitive set. Alex Ho, Executive Director, Marketing for American Greetings and I were humbled and proud to share our work at the 2016 ANA Masters of Marketing Conference.”.

You can watch the video for the World's Toughest Job below: