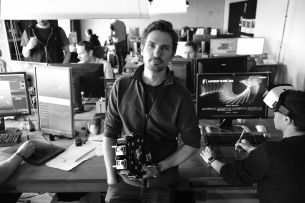 Creative production studio Ambassadors is launching a new Virtual Reality branch. Following a year of testing and in response to client demand as a result of successful project work, the next step was to introduce Ambassadors VR as a specialist offering within Ambassadors.

Ambassadors VR is branching from Ambassadors Lab, a studio dedicated to innovation, which was founded in 2011 and has delivered successful projects such as the 2012 World Wide Fund brief to develop an infra red tracking technique and its ‘Nature is Us’ campaign with Doutzen Kroes, a Dynamic Broadcast Video program with Cube Compose  – an online cloud media tool –  and since the introduction of Oculus Rift glasses, Ambassadors Lab is fully focused on Virtual Reality.

The Lab’s 3D printer was used day and night and after many attempts, the final prototype of the 360° camera emerged. There was no established professional method of working, so Ambassadors created a bespoke workflow to ensure 3D/360° footage could be edited and altered.”

The Lab is used to work with different areas of expertise and crafts within Ambassadors. The Virtual Reality Studio fits perfectly within Ambassadors’ artistic philosophy which pioneers new creative techniques. Ambassadors Sound Studio perfected Ambisonic sound design, which makes it possible to position and mix sounds within a 360° environment. Due to this technique you can hear the sound design above, below or even behind you – ensuring a realistic experience.

After a year of tinkering VR cameras, workflows and perfecting its storytelling it is time for VR to leave the Lab and become a studio of its own.

Ambassadors VR is launched representing a selection of renowned Dutch film directors such as Marco Grandia, Jeroen Mol and Daan Hocks, to combine creative technology with experienced craftsmen, and bring the ever evolving 360° development to the next level.

The Virtual Reality studio is now fully operational and engaged on several projects over the coming month.  So stay tuned.