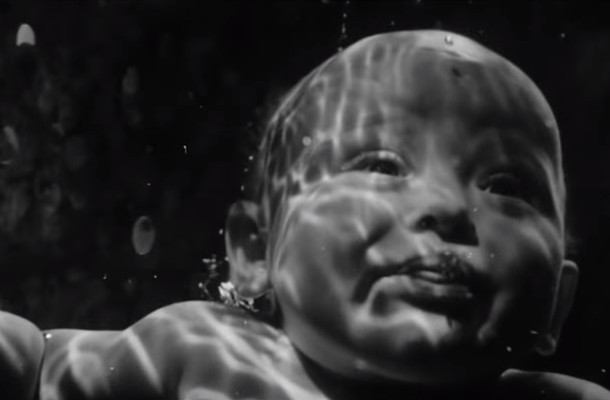 Alzheimer’s Research UK is launching a campaign to address the sense of fatalism that surrounds dementia and replace it with a more hopeful outlook, ahead of World Alzheimer’s Day on Friday 21st September.
Created by AMV BBDO, ‘First Breath’ broke on September 20th with an ITV premiere, then further TV spots and online channels, including Facebook and Instagram.
The campaign is inspired by the idea that the human race is born with a survival instinct, pulling together to overcome obstacles that are put in our way. The purest form of this being the moment when we come into the world and, powerless and unaided, take our very first breath.
The film makes the link between this innate spirit and the drive to deliver life-changing research breakthroughs for people with Alzheimer’s. It follows the journey of a baby swimming in an abstract underwater world and, when faced with confusion and adversity, showing a determination to kick forwards towards the light.
‘First breath’ is voiced by English actress Lena Headey (best-known for playing Cersei Lannister in Game of Thrones), with original music by Hollywood musician and composer Daniel Hart (Pete’s Dragon, A Ghost Story).
AMV BBDO set out to create an uplifting tone, and to bring a feeling of hope to a disease that is commonly considered as an inevitable part of ageing. The sound design has been carefully crafted to reflect some of the confusion and isolation that can be felt by those living with Alzheimer’s, the music and soundscape taking the viewer on an otherworldly and emotive journey.
Tim Parry – director of communications and brand at Alzheimer’s Research UK, said: “For too long the narrative around Alzheimer’s disease and other dementias has been one of hopelessness. Many people still don’t understand that dementia is caused by diseases, which we can overcome with research. Alzheimer’s Research UK wants to change the narrative from fear and hopelessness to one of optimism and possibility. We want to show that, through research, Alzheimer’s Research UK can make it possible to prevent, treat and cure diseases like Alzheimer’s.”
view more - Creative