Behind the Work 59 Add to collection

Shot on location in New Zealand’s South Island and then with additional studios shoot in Auckland, the visual effects helped play a part in this classic piece of visual storytelling from a visionary director 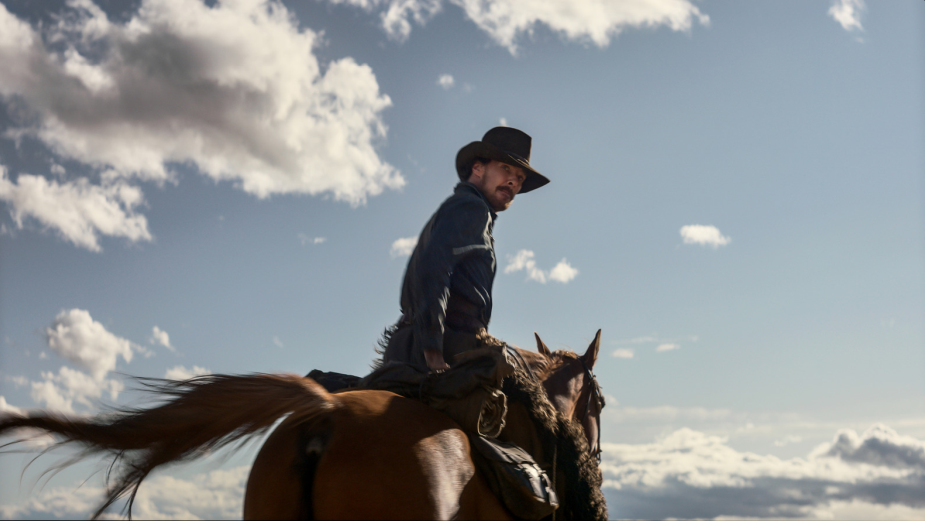 Jane Campion’s stunning masterpiece The Power of the Dog continued its history-making run for See-Saw Films and Netflix this week, with the film being nominated for a total of 12 Academy Awards.

In the film, charismatic rancher Phil Burbank (Benedict Cumberbatch) inspires fear and awe. When his brother (Jesse Plemons) brings home a new wife (Kirsten Dunst) and her son (Kodi Smit-McPhee), Phil torments them until he finds himself exposed to the possibility of love. The film was directed and written by Jane Campion.

Shot on location in New Zealand’s South Island and then with additional studios shoot in Auckland, the visual effects helped play a part in this classic piece of visual storytelling from a visionary director.

Though very much a naturalistic film, Alt.vfx completed over 200 shots, extending the production design further than we could achieve practically, and extending or adapting locations to sell the New Zealand locations as rural Montana.

“This project was a real partnership with the director, the DOP, art department, and visual effects,” said Alt’s VFX supervisor Jason Hawkins. “It was a real honour to work with a team like Jane Campion, Ari Wegner (DOP), Grant Major (Production Designer), Pete Sciberras (Editor) and the wider production crew at See-Saw.”

One of the big creative problems to solve was the ‘dog’ in the hills that Phil can see. The team discussed lots of approaches to how we could have something subtly fit into the landscape, but it wasn’t until traveling to the location on an early recce that Jay found the inspiration for the final approach.

“While scouting the environment at sunset we witnessed some magnificent shadows creep along the ridge lines, revealing all sorts of fleeting shapes and objects,” said Jay. “While we still explored more sculptural approaches for the dog, the shadow felt to be the most elegant solution.”

The main house the Burbank brothers live in was designed by production designer, Grant Major. Since it was only practical for budget to build a portion of the house, the decision was made to extend it in CG. Using the plans and reference materials, Alt were able to rebuild a VFX ready model of the house that could be seen from any angle, depending on the shot required. For the CG house, the team modelled and created 10637 roof shingles, 1229 wooden panels, and 38 windows, a complete model that blended perfectly with the practical build onset.

Like the house, the town of Beech started with some brilliant concepts and production design from Grant Major. However, since we only built one structure for the shoot we had much more freedom in post to expand upon the town and embellish as we got into VFX production. Largely a CG build, the town consists of 36 structures (a mix of houses and shacks), a water tower, train line, lots of CG detritus and debris, some digital horses, cows and people, and some distant digital matte painting environment extensions.

As you would expect from an atmospheric Western set on a ranch, cows feature heavy in the film. Depending on the shooting location, production had access to as much as 150 head of cattle on a day, with the Alt team then extending the herd in post, using a mix of both traditional 2D tiling and more complex CG cow extensions. The team built a CG cow system in Houdini with a library of cow behaviours animated in Maya, with the individual cows able to interact (and avoid each other) through a custom AI brain built inside Houdini.

Despite all of the work in post required to complete the film, the goal was always for the VFX elements to remain invisible in the context of each shot, as Jay points out. “With all of these the goal was always realism and to enhance every department’s ability in post with a light hand, so that it felt like it was done onset. We really strived to remain true to this amazing, complex story, and Jane’s vision. All of us are just so happy that we seem to have succeeded in doing that, as is evident by how the film has been received on a global stage.”