Buttrick was previously a planning director at Grey London 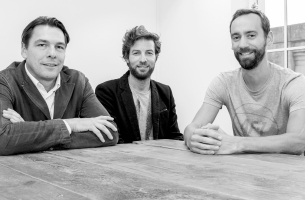 Creative agency Alpha Century has announced that it has appointed Matt Buttrick as its new Partner and Head of Strategy. Tasked with co-driving the agency’s vision alongside agency founders Hugo Feiler and Barnaby Girling, Matt will be responsible for boosting the agency’s strategic capability across all clients including Toshiba, Virgin Atlantic and Moo.com.

Matt’s wealth of experience stems from roles across the media and advertising landscape; where his hybrid of comms and creative knowledge ensures he is the perfect person to help businesses and brands succeed and communicate in a ‘post media’ world.

Previously a Planning Director at Grey London, Matt worked with brands such as HSBC, Lucozade, The British Heart Foundation, Brother, Dairy Crest and Duracell. Matt led the planning on Volvo which produced the Grand Prix winning LifePaint campaign at this year’s Cannes Lion Awards. He also won Grey London’s first Black Lion at Cannes 2014 for his effectiveness paper on The British Heart Foundation, followed up by a Gold at the IPA Effectiveness Awards a year later.

Before Grey, Matt spent 10 years as Planning Director at MediaCom London, looking after brands such as Audi, Sky, Nokia, Shell, Nikon and Allianz.  Again winning a Youth Media Lion at Cannes and an IPA Effectiveness Awards Grand Prix for the Metropolitan Police.

Hugo Feiler, Founder and Managing Director, Alpha Century, said: “We are very excited that Matt has joined us at Alpha Century as his blend of knowledge and expertise is rare.  As the line between a brand’s product and communication is blurring, we find it imperative to look for different thinkers and if you’ve met Matt you’ll know his experience and enthusiasm makes him the perfect person to help drive the company, whilst making sure that creativity and innovation are at the heart of every project.”

Matt Buttrick, Partner and Head of Strategy, Alpha Century, said; “It’s fantastic to come on board at Alpha Century and work in an environment that chimes with the fresh realities of modern business.  The client base is packed with different thinkers each driven by an entrepreneurial flair and we’re incredibly excited to accelerate their fortunes.”