Awards and Events 515 Add to collection 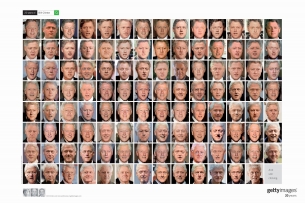 Getty Images, the global leader in visual communication, and Brazilian agency AlmapBBDO have been awarded at Cannes Lions for an advertising campaign in celebration of Getty Images’ 20th anniversary. Awarded a Silver Lion in the Outdoor Category, the campaign shows the changing face of high profile personalities over the past 20 years, featuring former U.S. president Bill Clinton, tennis player Serena Williams, actress Scarlett Johansson and Prince William, Duke of Cambridge.

AlmapBBDO dove into Getty Images’ award-winning library of over 170 million images to curate this unique visual timeline portraying 20 years of change. The images are arranged chronologically, allowing the viewer to follow the transformation of each personality over the years. Each personality selected has a large number of images in the Getty Images library – for example, there are over 32,000 images of Clinton.

Andrew Saunders, Senior Vice President, Creative Content, Getty Images commented: “We are thrilled with the reception the campaign has received by the Cannes Lions jury. As with many great campaigns it makes a virtue of simplicity. The changing faces of the personalities helps us imagine and appreciate their lives in a different but very direct way. It is also an honour to be recognised on a global stage by the world’s most influential creatives."

“Our long-standing relationship with AlmapBBDO is a relationship based on creativity and collaboration. As the leader in visual communication, we create content that inspires worldwide and in turn, enables best-in-class agencies like AlmapBBDO, to turn this content into inspiring and creative work of their own – as always, we are delighted to partner with them,” said Renata Simões, Marketing and Content Manager at Getty Images, Brazil.

The campaign highlights Getty Images’ continued leadership in visual communications, its quality content and the sheer breadth and depth of its archive, as it celebrates its significant 20th anniversary milestone.