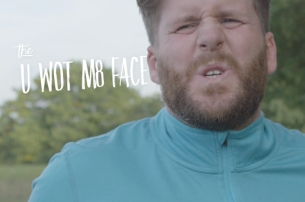 Virgin Money Giving is today releasing a video targeting next year’s London Marathon runners, which captures (and captions) the extraordinary faces runners pull as they approach the finish line.

Created by content agency AllTogetherNow, Whatever your run face promotes Virgin Money Giving’s not-for-profit model, which means that more of the money raised by fundraisers goes directly to the charity of their choice.

The film – which chronicles some classic ‘run faces’ from ‘Raptor Face’ and ‘The Terminator Face’ to ‘U Wot M8 Face’ and ‘Seen a Ghost Face’ – communicates the message: “Whatever your run face, you’ll look really good fundraising with Virgin Money Giving” because of the extra money received by runners’ chosen charities.

Antony Simm, Head of Social Media at Virgin Money, said: “Whatever your run face cleverly taps into one of the universal reality of running a marathon: your face tells a wonderful story and whatever that is, and no matter how sweaty or dishevelled you might look, it makes you feel incredible. It’s a fun film which we hope will encourage marathon runners in 2016 and beyond to contribute to their chosen charities with Virgin Money Giving.”

The film was created by Dan Evans, Creative Director at AllTogetherNow and directed by Ben Hanson and Simon Frost, through production company Carbon. It will be distributed to all 2016 participants through official London Marathon channels, as well as being released across Virgin Money Giving’s social platforms – rallying people nationwide to raise funds with Virgin Money Giving, next year and in future years.

Dan Evans, Creative Director at AllTogetherNow, said: “We wanted to create a piece of film that really resonated with runners, and inspired them to take on a fundraising challenge like the London Marathon. We hope this film communicates not only the funny side of having a ‘run face’, but the enormous sense of achievement, and ultimately grace, that marathon fundraisers experience as they cross the finish line.”

In the six years since its launch in 2009, donations through Virgin Money Giving have exceeded £344 million – over £407 million including Gift Aid. Due to its not-for-profit business model and lower fees, Virgin Money Giving estimates that £12.8 million extra has reached charities compared to the same amount being raised through Just Giving, the sector’s other leading fundraising website.