All Blacks Take the Tennis Court with Williams & Wozniacki... as Their Ball Boys 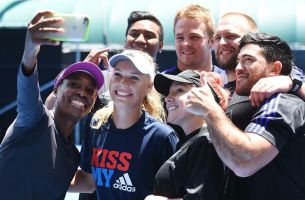 The All Blacks have proven they're world class when it comes to their ball-handling skills, so who better to assist tennis superstars Venus Williams, Caroline Wozniacki and Bethanie Mattek-Sands on court at the 2016 ASB Classic than Sam Cane, Nehe Milner-Skudder, Joe Moody and Julian Savea.

On the back of their success in 2015, the All Blacks were eager to prove their ball skills aren't confined to the rugby field, turning their hands to being tennis ball boys at the ASB Classic for the day.

Cane, Milner-Skudder, Moody and Savea were filmed chasing balls, holding towels and shading the tennis players from the sun during an exhibition match at Auckland's ASB Arena between Williams, Wozniacki and Mattek-Sands in Auckland last week.

The video was shot via Saatchi & Saatchi New Zealand as part of ASB's sponsorship of the ASB Classic, which now includes both the women's and men's tournaments, as part of ASB's increasing commitment to the Auckland-based tournament and its love of tennis.

ASB Bank's Head of Community and Sponsorship Mark Graham says ASB is thrilled with the public's response to the video."We enjoyed bringing our ASB Classic players Venus, Caroline and Bethanie together with the All Blacks. Celebrating ASB's first year of sponsoring both the men's and women's tournaments and of the All Blacks, seeing tennis champions and rugby champions interacting on the same court provided a bit of fun for the public; it was a great way to show ASB's love for both sports."Last year we wowed the world with 'The Best Ball Boys in the World' with our dog stars and we weren't sure it would be possible to find anybody that could do a better job of supporting this year's ASB Classic players on the court. But if anyone was up to the challenge, we knew it would be our All Blacks."